Appropriately, in a week that ended with Valentine’s Day, there was much to love where BDC sector prices were concerned.

If you happen to be “long” this segment of the stock market that is.

BDCS – the ticker of the UBS Exchange Traded Note which we’ve adopted as our tape measure for BDC price performance – was up 0.64%.

20 BDCs are trading above book value.

Fun fact: the BDC with the biggest premium to book is Main Street Capital (MAIN) at 86%.

As always, the good fortune surrounding BDC prices has to be seen within the context of the broader markets.

As will be news to no one, all the major indices have shrugged off coronavirus – excuse me Covid-19- concerns and are at or close to record highs.

That’s a second week in the row for the S&P, which mostly mirrors the state of play where the BDC sector is concerned.

As a result,  the BDC sector – using the Wells Fargo index – is very close to its recently posted YTD and All-Time High of 2,982.21.

As of Valentine Day’s close, the index was less than (0.1%) off that record.

Momentum, too, is strong with three quarters of BDCs trading above their 50 day and 200 day moving averages.

This is all to the good, but let’s keep some perspective:

The percentage price increase of BDCS is less than half that of the S&P 500 in the same period.

Moreover, BDCS has not yet broken through this rally’s high point of December 17, 2019.

Looking a little further back, BDCS remains priced materially below the August 2018 high point for that year, and nearly (15%) below the 2017 high.

At this point, BDCS trades (27%) below the November 2013 all-time high from a price standpoint.

To the BDC Reporter, these contrasting statistics underscore that the BDC sector is in no “bubble” and investors still have to contend – despite the current spike – with a secular downward trend.

We’ve had a historic drop in interest rates in these periods but that has not been enough – unlike with bonds – to goose up overall BDC price levels.

The BDC model with its continuing loss of book value per share from credit losses makes sustained price appreciation implausible.

As our continuously updated BDC: NAV Change Table shows, 30 of the 45 public BDCs have recorded lower book value per share since the end of 2017.

Notwithstanding that some BDCs have managed to increase their NAV per share (but only 2 over 10%), it’s hard for investors in the sector to ignore the preponderance of book value losers.

Looking at the lifetime chart for BDCS – which was launched in 2011 – do we see a rebound to historical levels underway or a pause before a continued price decline ?

This is what makes BDC investing so interesting, but confounding for anyone with a long term view: seeking to make a gain from distributions while swimming against the price tide.

Individual BDCs performance in this swings and roundabouts environment varies so widely that investors results can be diametrically different depending on which BDC horse you bet on.

Here – by way of illustration – is the divergent world of a hypothetical investor who chose to invest 5 years ago in Medley Capital (MCC) and Saratoga Investment (SAR).

We’re only showing the two BDCs stock charts here, but the situation is compounded when you consider that one BDC reported declining and then suspended dividend, while the other increased payouts religiously. 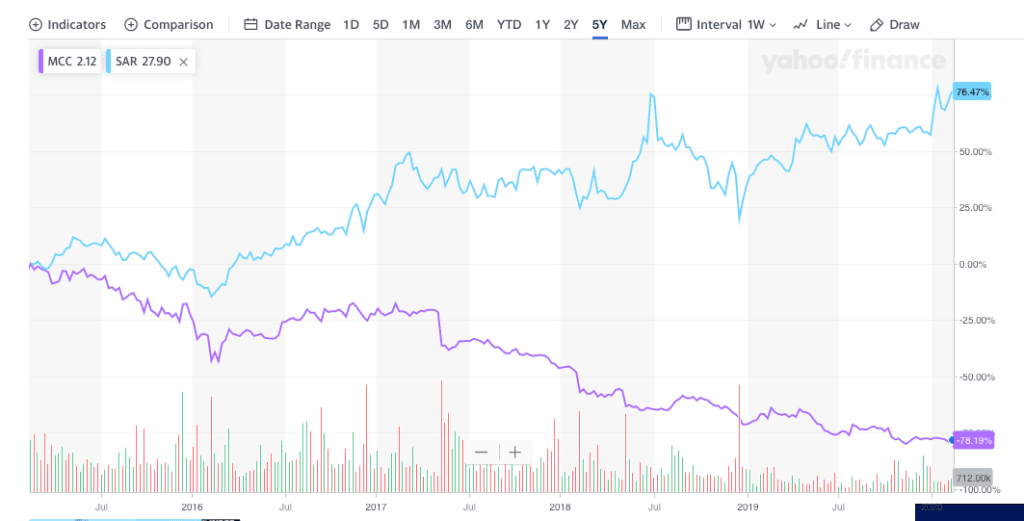 All of the above to remind readers not to pay too much attention to short term BDC sector movements and stay focused on trying to identify the long term individual BDC winners and losers.

This week another four BDCs reported IVQ 2019 results and – as always – there were significant variations in how well each BDC performed.

Prospect Capital (PSEC) had a POOR quarter – by our assessment – with earnings and book value dropping.

More importantly for the future, there appear to be several major portfolio companies exhibiting signs of ever greater credit stress.

Thanks to some pointed questions by an analyst – and (to their credit) fulsome answers by PSEC’s management, we learned a good deal more about under-performing InterDent, Pacific World and PGX Holdings.

Over $35mn in annual investment income is at risk.

We’ve not yet undertaken a full portfolio credit review for PSEC so the number of troubled companies is probably much higher.

After all, at the end of the IIIQ 2019, the BDC Credit Reporter had identified 16 PSEC under-performers with a cost of around $1.5bn, or approaching 50% of equity.

Of course, PSEC will dig itself out of some problem credits and ultimate losses on those they cannot will be far less than 100% of cost.

Nonetheless, even though the drop in NAV and income may have seemed modest in the fourth quarter the potential downside risk has increased a good deal more.

We should note, though, that the market didn’t seem to care – or had already discounted those assets – as the stock price was unaffected by the quarter’s results.

Maybe our concerns are overblown. We shall have to see what transpires in the quarters ahead.

Whatever happens, though, we can’t help thinking that PSEC may not have exercised good judgement in terms of portfolio diversification by investing so much in these individual companies.

The BDC prides itself on being an active player in as many as ten different market segments and has a 120 company portfolio.

Notionally, the average investment size at cost would be under $50mn.

Yet these 4 companies mentioned above are 4x larger than the average.

True diversification of portfolio risk is a key component of successful BDC investing over the long term in almost all cases, and one of the features the BDC founding fathers sought to promote.

Too many BDC players, for reasons good or bad, have managed to work around the rules in such a way as to create investment concentration risk.

Not only does that disproportionately impact BDC results if and when Things Go Wrong, but also make it hard for the BDCs involved to walk away from troubled businesses.

The result can be good money going after bad as BDC managers seek to rescue their larger troubled investments, which has the potential of compounding an already serious risk.

For example, InterDent began as an investment in first lien debt in 2012 of just over $100mn.

Currently, PSEC’s exposure has increased to $255mn, as the BDC seeks to help turn around the company that has been on non accrual for over a year…

PSEC, though, was the only BDC to get a POOR rating during the week.

That was good enough for the market to push up its stock price as much as 4.0% in the days that followed the earnings announcement.

We’ll be publishing a Results Summary for ICMB shortly, but we have already reviewed, highlighted and annotated the BDC’s Conference Call.

Check out the new BDC: Results Summary Table for the link.

We’ve not yet completed the equivalent report for GBDC, but we have annotated the Conference Call and added an “Executive Summary” of the material new information we learned.

It’s worth noting that where both ARCC and GBDC are concerned,  there were notable credit problems that emerged this quarter.

As usual, the BDC managers involved downplayed the impact of these ongoing setbacks.

David Golub of GBDC said “From my vantage point, what I am seeing is idiosyncratic issues that are very different from credit to credit”.

ARCC’s Michael Smith said :” The credit quality of our portfolio continues to be stable.”

Still, the total number of non-accruals at GBDC increased to 7 in the IVQ 2019, from 5 in the prior quarter.

The dollars at FMV at risk were substantially higher, as this extract from the 10-Q shows:

Moreover, the two health care that were discussed on the conference call – Oliver Street and Dental Holdings – aggregateby themselves a not immaterial $42mn at cost.

The former was added to the non accrual list this quarter, resulting in the interruption of ($2.2mn) of annual investment income.

Most notably VPROP (aka Vista) ceased making payments and ARCC has $158.4mn invested at cost, almost all in debt.

ARCC estimates the annual loss of net investment income will be about $0.03 a share, according to the conference call transcript.

The investment by itself – at cost – is equal to 2% of ARCC’s net asset value.

From the BDC Reporter’s viewpoint, these credit problems may not be disastrous – or out of the ordinary – in a combined portfolio of 604 companies, but still deserve investor attention.

We’re not alone as the analysts on all conference calls of late are asking numerous questions about under-performing credits, even of the better performing and “premium to book” BDCs.

The BDC Reporter does not expect to have a full picture till some time after BDC earnings season is over and we have the opportunity to review every BDC’s every investment.

For the moment, we’re updating our files with the low hanging fruit of companies that BDCs choose to discuss on their conference calls.

You’ll see us update in the BDC Credit Reporter more and more individual under-performing companies as we work through our backlog of latest developments.

So far in BDC Earnings Season, we’ve written about Maxus Capital Carbon (AINV) and VPROP (ARCC) based on revelations in the conference calls.

There are numerous other updates coming up as we co-ordinate our review of the BDC’s company commentary with disclosures in the filings, the latest valuations and any recent public news.

As you can see for yourself by looking at the BDC: NAV Change Table and the BDC: Results Summary Table, 15 BDCs have reported fourth quarter results so far.

Of those, 7 have seen their NAV increase and 7 decrease and 1 has remained unchanged.

In terms of the overall results rating – which has an element of the subjective – 7 are rated GOOD, 7 are MIXED and only 1 is a clear cut POOR, which is PSEC as discussed above.

In terms of “regular” dividend announcements – those paid monthly or quarterly – for the IQ 2020: 12 are unchanged, 2 recorded increases (CSWC and GAIN) and 1 is not paying a distribution (MCC).

So far, no BDC has cut its  “regular” payout.

Looking down the road for the rest of 2020, we expect “regular” dividend increases from SAR, CSWC, GAIN, ARCC and even MVC.

However, a number of BDCs may not be able to maintain or improve on the “special distributions” they paid out in 2019.

Ironically, included in this category are GAIN and CSWC.

We wonder if those extraordinary pay-outs can be matched in 2020, which means that total payouts may actually drop modestly year over year.

Finally, we question the sustainability of PSEC’s monthly distribution, but recognize that the BDC has many tools at hand to maintain its earnings and pay-out, even in the face of greater credit problems.

We’ll bring our readers a further update every week till BDC earnings season is done with.

With so many BDCs still to report results, we’re not drawing any hard and fast conclusions about BDC sector performance and outlook as yet.

We’ll wait – as in an election – till all the precincts/BDCs have reported.

We’ll wait – as in an election – till all the precincts/BDCs have reported.