One For The Books

This was a historic week, with the markets facing the news of a major shooting war in Europe for the first time in 77 years.

However, with no American “boots on the ground”, the markets proved to be not much stirred, as covered in the Daily Updates we’ve written.

The BDC sector fell in price for a third week in a row, but more notable was that the BDC Wilshire Index total return was off only (0.17%).

Likewise, BDCZ – the UBS sponsored exchange traded note which owns most BDC stocks and serves weekly as our price proxy – fell but (0.25%).

Clearly, the reaction of the investment community could have been much worse as analysts started dragging out old calculationsshowing how markets had dipped – and revived – in the past.

Instead, BDC investors – like most of the world community – mostly watched and waited to see what would happen next.

Turning to our regular weekly metrics, 14 BDCs managed to increase in price and 32 dropped. 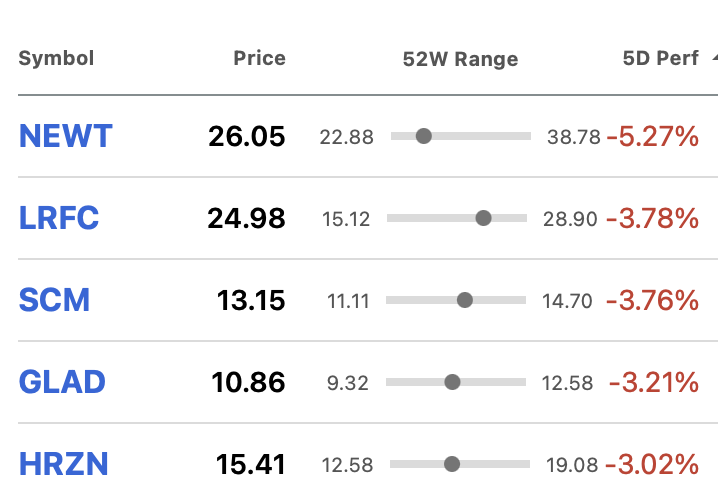 This list of biggest losers does not include any of the large cap BDCs (AUM greater than $1.0bn) that increasingly dominate the sector where assets and market capitalisation are concerned.

We should also report that two BDCs reached new 52 week price highs despite the dreadful news emanating from the Ukraine.

These were achieved by Hercules Capital (HTGC) and Owl Rock Capital (ORCC).

Both are large cap BDCs, and both reported IVQ and full year 2021 results this week.

That seems to have been enough for investors to give both both players new record prices.

ORCC – much more recently on the public BDC scene (2019) – is at the highest level reached in two years.

To balance the picture out, we should mention that there were three BDCs trading within 5% of their 52 week lows.

However, this price underperformance does not appear to be related to geopolitics and was already underway before the events of this week.

Over at GECC, investors have been worried for some time about dilution from recent acquisitions paid for partly with issuance of the BDC’s stock.

Adding to shareholder angst this week were concerns that lenders to GECC’s portfolio company Avanti Communications might not renew one of its numerous debt facilities.

If that occurred, the likely result would be some form of bankruptcy.

Last we heard – as discussed in the Daily Update – is that an extension of the maturing debt was negotiated between the parties, but details are scarce.

SUNS and SLRC are preparing to merge, and both BDCs are trading down in the final days before the former is swallowed up by the latter.

Fundamental performance at SUNS and SLRC remains good, so we don’t believe these drop in price signal some risk to the business going forward.

In another hopeful sign for the BDC sector, the number of BDCs trading at or above net book value per share actually increased from 17 last week to 18 as of February 25, 2021.

Furthermore, the number of BDCs trading within 5% of their 52 week highs after slumping to just 1 name as of February 18 revived to a total of 10.

That’s still below a recent high of 14 when the BDC sector was in “re-rally” mode, but impressive none the less.

The BDC Wilshire Index – using the Total Return – is also down on the month but still up modestly for the year:

Given the “wall of worry” investors have been asked to climb in 2022, we’d say that’s an encouraging performance by the BDC sector as we come to the end of month two.

Assuming no further repercussions from the Ukraine crisis – admittedly a big if – the BDC sector seems geared to return to the “rally mode” that began January 24 and lasted till February 8.

Throughout we’ve been reminded shamelessly by BDC managers that their loans are tied to a reference rate (SOFR) likely to greatly increase in the months and quarters ahead.

This will boost interest income and be only only modestly offset by higher interest expenses as most BDCs are borrowing at fixed rates which will not change when SOFR rises.

Admittedly, we’ve also been learning what we already knew: that every BDCs mix of fixed and floating debt is different as is their average loan “floor” that has to be reached before interest income can be reached.

Moreover, investors seeking to estimate how much BDC earnings might be boosted by a higher reference rate have to make very difficult assumptions about how much rates will rise and in what period of time.

What’s more – remembering that the entire rate raising exercise is intended as a temporary brake on inflation – an assumption has to be made about how long higher rates might last and what they might drop back to.

Which is all to say that the El Dorado of higher rates will also involve a host of new uncertainties, which will be analysed in different ways by the investing community.

Outside of that – and as we’ve been describing in the BDC Reporter’s Daily Updates and annotations of earning releases – recent BDC results have continued to impress.

As the BDC NAV Change Table shows, of 23 BDCs that have reported IVQ 2021 results, 16 have higher net book value per share to boast of, 1 was unchanged and only 6 are in the red.

Even the relatively few BDCs with lower NAV Per Share can mostly point to the impact of paying out higher than average distributions as the main reason for their drop.

So far, you can count on one hand the number of new companies joining the non accrual list, reflecting the general trend in leveraged lending of very low defaults and bankruptcies.

Turning to the outlook for distributions:

The BDC Reporter seeks to project out likely distributions for every BDC in 2022-2026.

When we compared the numbers for 2022 over the actual payouts by BDC in 2021, there were 21 names that we expect to see an increase in the payout this year over last.

Another 17 are expected to remain unchanged and 2 are not paying a distribution at all.

That leaves only 6 BDCs projected to pay out less to shareholders this year.

Even there, the reason for the expected lower payout has more to do with the BDCs concerned having set the distribution bar so high in 2021 because of “special” dividends that 2022 cannot match.

In fact, we only presume 2 BDCs – both minnows – may reduce their distributions in 2022 because of weaker income performance than in the past.

For somebody who’s been watching BDC developments for nearly twenty years (sigh), we can’t remember a period when the outlook for higher dividends combined with low credit risks has looked so favorable.

That’s before we even take into account the impact of higher rates.

Of course, the market may already have “priced in” all the above.

Back in 2006 there was a similar confluence of upward pressing BDC earnings and distributions wedded with few credit challenges.

We all know how that ended a year later when the Great Recession came along.

Right here, right now, though, and assuming no negative impact from the conflict in Europe, there are multiple reasons to expect the BDC sector to resume an upward price path.