In the first full week of the new year, the BDC sector pretty much followed the same path as in recent weeks.

The number of BDCs up in price on the week was 33, significantly higher than 21 the week before.

Still, the number of BDCS trading within 5% of their 52 week high and low remained at 12 and 2 respectively.

Likewise, the number of BDCs trading above book value was unchanged at 19, with 26 trading below.

Even if we look at the data in a slightly longer time context, the changes are modest.

Over a 1 month time frame 20 BDC stocks are trading  higher in price, which is the same as last week.

All in all, the BDC sector has begun 2020 well enough – neither weakening nor strengthening all that much.

Top dog was Saratoga Investment (SAR) , which bounded up 7.7% on excellent results.

The BDC’s reporting quarter ended in November, so SAR was the first out of the gates with the last quarter of 2019’s results.

The BDC Reporter summarized the results in an article published on the day of the earnings release.

Given the unexpected sale of the BDC’s largest portfolio company – Easy Ice – the increase in the stock price seems merited.

Going Places. But How Quickly ?

As we discussed in an earlier review of the BDC’s balance sheet, SAR has all the levers in place to eventually become a billion dollar fund.

Given that portfolio assets remained roughly unchanged at $500mn in the latest quarter, that would be quite a material change.

However, our sanguine view was reached even before the Easy Ice news came out, which boosted book value more than we anticipated.

The caveat is that SAR is likely to take a very long time to marshal all its SBIC debenture and Baby Bond borrowing power, not to mention boost its equity base further, before we get to the billion dollar mark.

Nonetheless, this is a long term business and the BDC Reporter – around in one form or another for over a decade itself – likes to take a long term view.

Also up sharply on the week was Oxford Square Capital (OXSQ), a very different BDC that has been mostly in the red of late following poor IIIQ 2019 results.

We’re guessing that value investors are anticipating a bounce back in CLO values and are re-visiting OXSQ, whose price dropped as much as (15%) in the wake of the IIIQ results.

Since the nadir – which occurred a couple of days after the results came out – investors have been buying back in.

With this week’s spurt in OXSQ’s price  of 6.8%, the stock closed only 2% off the level just before the third quarter results.

OXSQ has increased in price more than six times more than the BDC sector in this period, which suggests a lot of optimism following that panic selling.

Or, there’s always the chance something else is going on from an M&A perspective that we’re not aware of.

We did double-check all the BDC’s recent filings, but found nothing new or revealing.

The yield at the current price is 13.8% and was 15.9% when the price bottomed, so the enthusiasm may be for the plump yield.

We’ll find out soon enough when the BDC announces IVQ 2019 results, although no date has yet been set.

Also climbing out of the cellar this week is Portman Ridge Financial (PTMN), up 6.1%.

Since April 2019 PTMN has lost nearly half its market value.

Not helping is that the new manager of what used to be KCAP Financial cut the regular distribution by (40%).

Hope dies hard in BDC-land and with the merger with OHA Investment, PTMN’s investors are in an optimistic mood.

We won’t have any view till we see what the combined PTMN-OHAI balance sheet looks like.

We do wonder, though, if the BDC’s manager will follow Apollo Investment’s (AINV) example and undertake a reverse stock split.

Having a stock price under $5 is not appealing to many investors.

At the moment, the only BDC with a stock price lower than PTMN is MCC…

On the bottom end of the stock price change table for the week is Newtek Business Services (NEWT).

The BDC’s stock price has been experiencing “price weakness” of late after a very good run-up during 2019, which included reaching an all-time high in early December.

It’s no wonder that there should be some profit taking.

Since hitting that highest of highs, NEWT is down (7.5%), mostly in the last few days.

As with OXSQ, there’s no material development to point to so we’ll stick with our profit-taking thesis.

In the last two years, we count 10 instances in which NEWT’s stock price has dropped (5%) or more in a brief period before moving up again.

On the other hand, the brave soul who bought NEWT at its lowest price in December 2018 and sold at its apex a year later would have made a total return of about 66% by our calculation.

Some BDCs  have become “momentum stocks”, with all that entails for gut wrenching price changes.

Now the holidays are over, there have been more BDC developments for the Reporter to track.

As always, we seek to highlight every news story worth clicking on the  News Feed that appears on the front page of the website.

Admittedly, some were routine dividend announcements for an unchanged distribution:  Solar Senior Capital (SUNS) and the two PennantPark BDCs (PFLT and PNNT).

That last pay-out is unchanged from the prior period and – ironically given that the BDC announced record NAV – ends a five year streak of increasing dividends.

Management has always been very careful about its dividend policy.

For years after taking over the almost bankrupt BDC in the wake of the Great Recession, no cash dividend was paid.

Instead, investors were paid their share of the income in more shares.

Even when SAR began paying a dividend, the amount chosen was well below the actual earnings level which made much easier its well regarded strategy of perpetually raising the distribution by a small amount: usually $0.01 a share per share.

Now, having lost a major earning asset (albeit in PIK) in Easy Ice and with many new shares issued in recent months, caution has become the watchword again.

A later resumption of the upward course of dividend payments will depend on much investing and re-investing of capital to boost investment income.

That’s going to be made harder in the short term by lower LIBOR and that continuous  flow of repayments that all BDCs have to contend with.

Neither the BDC Reporter, nor the BDC itself, can tell when AUM will grow in net terms in the short to medium term so we’d take any analyst projections with a grain of salt for much of 2020.

Probably the most important development of the week – at least from a capital market standpoint – was Triple Point Venture Growth’s (TPVG) stock issue.

A little like NEWT, TPVG has been an investor favorite in recent quarters.

As this chart shows, in 2019 TPVG fared better than NEWT and way above the price performance of the BDC sector. 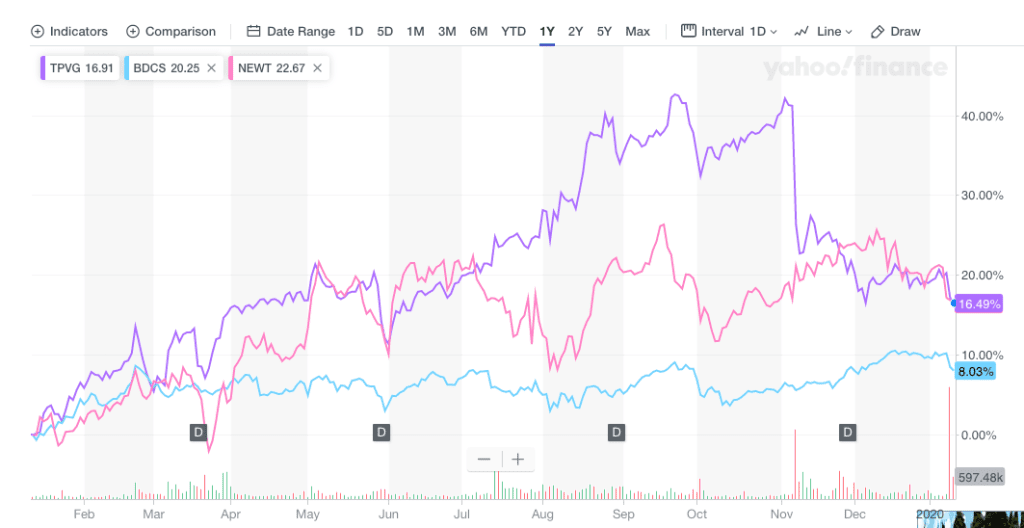 The only problem was that in the third quarter of 2019, TPVG reported less than stellar, and worse than expected, results.

The analysts had been touting $0.39 of Net Investment Income Per Share, after an actual result of $0.40 in the second quarter.

The actual IIQ 2019 NIIPS was $0.29 even as the portfolio grew to over half a billion dollars in size, its largest ever.

NAV Per Share, which had been moving mostly upwards since IVQ 2017 dropped in the third quarter to $13.47 from $14.19, wiping out 5 quarters of book value growth.

This is what CEO Labe said on the Conference Call at the time:

“We had some mixed results this quarter. We experienced only one very small customer prepayment. It was a nominal amount. We also had a reduction in our stock prices in our public stockholdings and saw a decrease in value at some of the portfolio watch list companies. So as a result, we didn’t cover the dividend with our NII, and we had a $0.72 reduction in NAV. But we also had many positive events and developments, which benefits us in the continued growth in scaling of TPVG in what is shaping up to be a really strong originations and fundings year.”

Management argued that earnings were unusually depressed by low pre-payments and indicated IVQ (as of 11/06) repayments were already much higher.

Moreover, while there were credit problems none were new in the period, and thus contained.

Anyway, investors seem to have been convinced of the TPVG story and the BDC was able to issue 5mn new shares this week at a net price of $13.65.

Existing shareholders will note ruefully that’s nowhere near the $17.17 52 week high the BDC has traded at.

Nonetheless, the secondary is just over book value and accretive.

By the way, in two other filings this week we’ve been hearing of significant BDC new share issuances happening under equity sales programs.

Chances are similar stealth secondaries are going on in this manner at other popular BDCs.

The result, along with the much discussed higher leverage allowed Small Business Credit Availability Act, will be an ever larger public BDC sector in terms of capitalization and assets under management.

Helping the situation – as we’ve seen time and again as lenders to BDCs renew or extend facilities – is a very generous environment for adding both secured and unsecured debt.

We’ll be discussing the many developments in the latter segment when we undertake the BDC Fixed Income Market Recap.