On paper, the holiday-shortened week saw the BDC sector move up modestly over the level as of Friday, December 27, 2019 – the last full week of last year.

However, the rest of the metrics we pore over like so many tea leaves every week, were much more mixed.

There were more individual BDC stocks down in price than up: 24 to 21.

The biggest downer was Owl Rock Capital (ORCC), off (9.1%) after a few weeks of running up.

The Wells Fargo BDC Index – which provides a “total return ” snapshot – was actually down on the week by (0.16%).

The slow-moving BDC rally – which we begin to track once we get a sustained upward move of 5.0% or more – is in limbo.

The rally began on October 14, 2019, and saw BDCS move up from a lowest to highest change in value of 7.4%, using intra-day numbers. 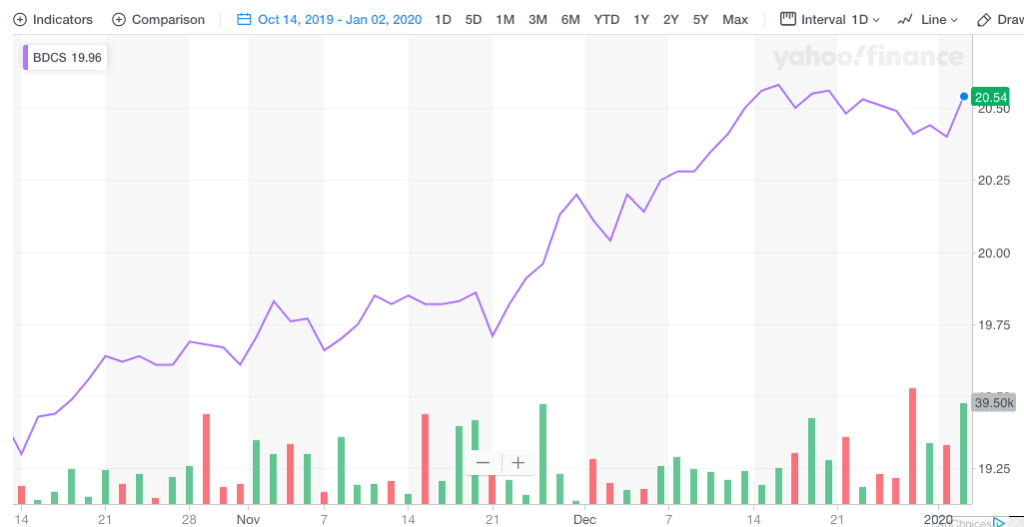 The principal change in the metrics we’ve noticed in these last few months – besides the change in BDCS – has been in the number of BDCs trading above book.

Furthermore, it’s worth noting that the rising tide has lifted most every boat, with only two BDCs trading close to their 52-week lows.

The former’s poor performance can be understood in the context of its recent dividend cut; credit problems and earnings challenges.

The latter’s stock price is weighted down by constant selling by one of its insider groups and by never-ending concerns about the credit quality of its largest investment: Avanti Communications.

GECC continues to talk up the outlook for the satellite operator on most every conference call and has advanced more capital in recent quarters.

Yet, a glance down Advantage Data’s records of the investment values show the equity GECC and BlackRock TCP (TCPC) own being written down by more than (80%) at FMV.

TCPC’s discount was even higher (33%), according to AD.

For GECC, even a much written down Avanti stake accounts for 42% of net assets, so one can understand investor concern.

Going forward – as we make more headway into 2020, we’ll be interested to see if the flagging BDC rally gets a second wind.

In the past, we’ve seen new monies coming into the sector at the turn of a new year lifting prices, but there’s no guarantee that this will occur.

From a news standpoint, there was little that happened to move the markets one way or the other.

We seek to track every development – including major price changes –  on a daily basis.

Most anything that happened before and after the New Year’s holiday was routine and only of interest to shareholders of the BDCs involved.

There were a couple of dividend announcements (CPTA and PFLT), which were at expected levels.

A well-known name in the BDC space – James Zelter – resigned from Apollo Investment’s (AINV) Board, but appears to be staying put at Apollo Global.

The biggest story of the week – which we covered in an article –  was a lawsuit by two different Alcentra Capital (ABDC) shareholders against the BDC and its Board members, seeking class action status.

At least one reader has written to call the lawsuit more of a shake-down than anything else, but we felt duty-bound to review the claims made in the complaint.

Anyway, as we anticipated in the conclusion of the article, the last-minute lawsuits do not seem to have affected the stock price.

BDC credit conditions, though, have been much busier than might be expected at the beginning of a year with many professionals still on the slopes or in their Caribbean hideaways.

As the BDC Credit Reporter has been recording, there have been a number of material developments that will affect multiple BDCs and involve hundreds of millions of dollars.

Over the weekend, we wrote about a recapitalization just agreed at Moran Foods LLC – known as Save-A-Lot Grocery – to which TPG Specialty (TSLX) is a lender.

Then there’s the likely restructuring or bankruptcy about to happen – according to the WSJ – at Constellis Holdings, a leading security company, and which involves 8 BDCs and $107mn in debt.

A New York fixture – Fairway Markets – is said by the New York Post to be eyeing Chapter 11 for the second time in a few years.

Then there are other major borrowers teetering on the brink that we’ve been watching for months, like Frontier Communications, McDermott International and TOMS Shoes.

There’s much more going on on the credit front – mostly to the downside but occasionally positive – than we can cover here.

We suggest readers interested in the subject check out the BDC Credit Reporter before we move to a subscription model.

For the moment – grappling as we still are with reaching full credit coverage of the BDC sector  – we’re not drawing any grand conclusions about this level of activity.

“Idiosyncratic” (a favorite BDC manager term when describing a troubled borrower) issues may lead us in the wrong direction.

As our dataset fills out and the year progresses, a clearer picture might emerge.