Joined At The Hip

Just in case any further evidence that the fortunes of the BDC sector are tied to that of the broader markets look no further than the last two weeks.

The coronavirus has accomplished what multiple other “wall of worry” issues have failed to do: chiseled away at investor confidence.

The S&P was down (2.12%) this week, which included the largest single day move down in months.

Unsurprisingly, the BDC sector – as measured by the UBS Exchange Traded Note with the ticker BDCS – followed along, off (1.33%).

On the week 38 BDCs were down in price and only 7 stayed flat or moved up.

Not one BDC moved up 3.0% or more in price in the week compared with 13 eight weeks ago.

That’s four times as many as the prior week.

All 4 BDCs involved were the mid sized kind: MRCC, CPTA, GAIN and GECC.

Funnily enough, MRCC’s drop of (8.9%) followed  weeks of an ascending price, which we discussed at length in the Recap just last week.

This supposedly omniscient and all-knowing market can’t seem to make up its mind.

Here’s a chart of MRCC’s stock price just from late August till the end of January: 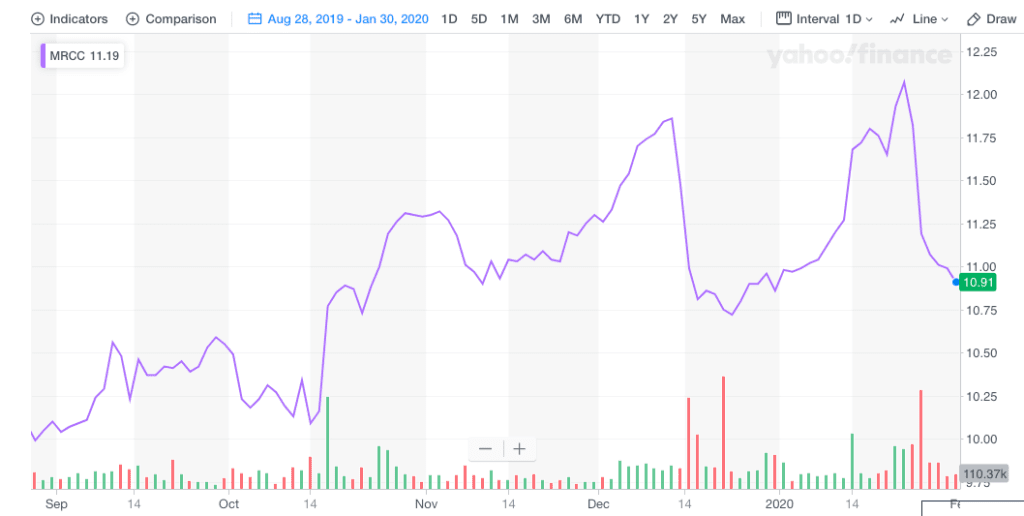 As anyone can see, there have been a couple of impressive climb and as many vertiginous falls in the matter of a few weeks.

The current feeling appears to be that MRCC will be handicapped by under-performing borrowers when reporting IVQ 2019 results and a dividend cut may be in the offing.

No date has yet been set for the 2019 results, but if last year’s schedule is any guide expect to learn more early in March.

Change In The Wind

Getting back to the market, there is a definite – but not necessarily irreversible – change in investor sentiment after two weeks in the red.

There are now 6 BDCs trading within 5% of their 52-week low price.

Just a few weeks ago, when the rally was rolling along, there was only 1 BDC in the price basement.

At the top, there are now just 9 BDCs trading within 5% of their highs.

That’s way down from the 16 we recorded two weeks ago.

We’re not close to calling the end of the BDC rally.

However, we are in uncharted territory here with the Chinese virus.

Nobody really knows how much the major indices may move down in reaction to the growing health scare.

Joined At The Hip

We can be pretty sure, though, that if the major markets panic so will BDC investors.

That’s what happened – under a very different scenario – when the Euro-crisis of 2011 occurred and knocked down the price of BDCS by as much as (24%) in a few weeks.

In fact, the past year has been unusually stable for the sector from a price standpoint.

Maybe we’re due a little more share, rattle, and roll.

Torn From The Headlines

Within the BDC world itself this week was dominated by the final days of Alcentra Capital (ABDC).

This Bank Of New York managed BDC came to market with high hopes in May 2014, raising $100mn of capital.

All was well with the portfolio until the spring of 2017.

Around that time the BDC managed to raise even more capital and its manager sold off its large common stock position.

In the latest Proxy that ownership percentage had dropped to 4.53%. See page 416.

In any case, ABDC’s business and stock price fortunes began to decline precipitously after April 2017.

It’s perhaps no wonder that Bank Of New York didn’t put up much of a fight when a disgruntled shareholder pushed for a sale of the BDC.

Not very long thereafter, Crescent Capital was brought in as a white knight and what could be rescued has been.

This week, we learned how much the final distribution of earnings – required under the rules to be paid out before the close – was to be: $0.80.

At the close on Friday, the acquisition of Alcentra occurred in a two-step process and the BDC is no more.

Instead, Crescent Capital should be joining the public BDC fraternity next week, with its balance sheet and shareholder count swelled by the addition of Alcentra.

Look for Crescent Capital BDC to be open for trading on NASDAQ on Monday, February 3 under the ticker CCAP.

This was probably one of the best possible outcomes for ABDC’s shareholders, especially when compared with the ongoing miasma at Medley Capital (MCC) where no resolution continues.

In the week ahead, IVQ 2019 BDC earnings season begins in earnest.

A host of BDCs will be reporting results from Monday on.

In every quarter – almost – there is at least one notable BDC that drastically fails to meet expectations.

Who will be this quarter’s “epic fail”?

We’ll be trawling through the results looking for those BDCs that under-perform or outperform market expectations and will bring them to the attention of our readers as soon as we can.

With the unsettled global environment, this should be an intriguing and (possibly) market-moving BDC earnings season.

Will the 6.5% run-up in the price level of the BDC sector we’ve seen in advance of IVQ 2019 earnings melt away or gain a second wind?

Anything is possible, but our view is that investors have been unduly optimistic for some time and a price retrenchment is the most likely scenario.

We have no claim to infallibility, so we’ll see what plays out in the very busy days ahead.