Since early October, BDC common stock prices have been falling every week.

That’s four consecutive weeks in a row through October 30, 2020 – the longest period of falling prices all year.

Yes, even including the March 2020 price meltdown.

That was just short of putting the BDC sector in “Correction” territory.

All that ended this last week, which coincided with both the Presidential election (and its immediate aftermath) and week two of BDC earnings season.

That’s the biggest weekly move upward by BDCS since May, and makes up more two thirds of what was lost price-wise in the preceding weeks.

As you’d expect, this was a broad-based rally, with 44 of the 45 public BDC stocks we track joining the party.

Only Great Elm Corporation (GECC) saw its price drop during the week.

That number includes a remarkable 12 that were up 10.0% or more.

Previously timid BDC investors bought up any BDC that reported good IIIQ 2020 results, or even not so good.

Top of the table was one of the worst performing stocks of the year: Capitala Finance (CPTA).

Despite continuing not to pay a dividend and an ever smaller portfolio size, investors were delighted by a 3.2% increase in NAV Per Share and a new $25mn secured revolver.

That takes the troubled BDC away from trading within 5% of its 52 week low, the only BDC left in that category in recent weeks.

Also booking big gains on the week were other BDCs that came forth with IIIQ 2020 results this week.

Rather than rattling off more names, we’ve included the list from Seeking Alpha of all the BDC stocks up 10% or more: 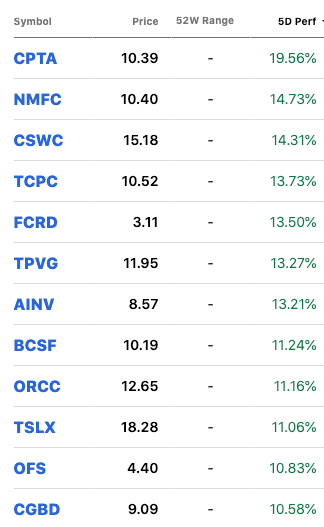 As BDC Reporter readers will know from reading these pages, every BDC on that list has reported IIIQ results.

Investors are generous with their monies once the results are in, wary beforehand.

Now let’s measure how far this see-sawing of BDC prices has taken us in a longer time context.

Essentially BDCS is back to the level of September 10, using our Friday close data.

The Wells Fargo Index – with its “total return” formula – is just a little off its post pandemic high level set on June 8.

Which is all to show that this week’s upward price antics have not rescued 2020 from being a very poor year for BDC investing – as well as much else besides.

However, we should say that BDC earnings season – both last week and the one before – has been highly reassuring from a performance standpoint.

We’ve only just finished reviewing every press release, investor presentation and conference call transcript, and are still slogging through the 10-Q filings.

Nonetheless, we can say with some confidence – just by reference to the BDC Performance Table –  that earnings season has been proceeding well.

In total, 28 different BDCs have reported IIIQ 2020 results already and 19 the BDC Reporter has rated as GOOD,  8 as FAIR and only 1 as POOR.

The sole POOR performer is BlackRock Capital Investment (BKCC) which – seemingly – every quarter manages to find a new way to trip up.

This quarter – as discussed on November 6, 2020 – the newest challenge was the BDC’s largest single investment: asset based lender Gordon Brothers.

That investment – which for years generated double-digit returns and was carried at par – got into trouble due to the pandemic and has now been (mostly) sold off.

Otherwise – and if you’ll allow us to broadly generalize what we’ve seen so far in the numbers – BDC investment activity has been perking up; portfolio yields are improving and credit is stabilizing.

Also, all but a handful of BDCs have more than adequate liquidity just in case we get another round of financial disturbance.

Now only a couple of BDCs have regulatory leverage in the “danger zone” above 1.50x debt to equity as new equity raised and debt paydowns have improved the situation at multiple players in trouble as of the first quarter.

We’re even seeing some positive developments in the area that investors rightly care most about : BDC dividends.

OFS Capital (OFS) which had cut its regular dividend in half earlier in the year, announced a IVQ $0.02 “special”.

We’ve added a column to the BDC NAV Change Table which shows that the average drop in 2020 net book value so far is (12%) versus a (32%) decrease in price.

By the end of the quarter – if early returns are any guide – we expect that the drop in NAV Per Share may go to single digits.

With a fair wind by year’s end we may see many more BDCs than just Saratoga Investment (SAR) and TSLX boasting a better net book value per share number in 2020 than the year before.

At this stage – and before any second shoe drops in the economy or in credit performance – the greatest damage to BDCs – and their shareholders – appears to have come from the drop in LIBOR in the first quarter.

The nine-tenths drop in that base rate almost overnight  – which amounted to a 10% or even 20% decrease in top line income – caused a hit to expected profitability at every BDC without exception.

Roughly half were so hard hit – and with no sign that LIBOR would bounce back for years to come – that unplanned reductions in dividend levels followed.

Again, see the BDC Performance Table for a column tracking who maintained, reduced or suspended their dividend, and/or paid the shareholders in stock rather than the much preferred cash.

Not What We Expected To Write

However, very little of the damage to BDC earnings and distributions can be directly attributed to outsized or unusual credit losses.

There have been some cases where one could argue BDC managers made errors in the construction of their balance sheets which caused dividend cuts be worse than they might have otherwise been.

Overall, though, if we take a snapshot of BDC balance sheets as of the IIIQ 2020 the sector has been much more resilient than most observers – including the BDC Reporter – might have expected at the beginning of the crisis.

Judging by how investors have amped up the prices of BDCs that have reported results in the last two weeks, the market seems to be catching on to the notion that things are not so bad in BDC-land.

That allows for the possibility that we might yet see a further increase in BDC prices before year-end, with 7 weeks to go.

If the markets don’t fall apart because of worries about the presidential transfer of power, there’s still a chance the Wells Fargo BDC index may narrow its 2020 loss into single digits.

Admittedly, there are still several “problematic” BDCs yet to report earnings amongst the 17 still to come, but there are also some which have been already demonstrated an improving trend.

Overall, we are hopeful that the BDC sector can build in the weeks left on this week’s rally and yet turn 2020 from a disastrous year where price performance is concerned to just a mediocre one.