At this same time last year, the BDC common stock sector was in turmoil.

That was nearly a fifth of the market value of BDC stocks lost – using BDCS as our measuring stick – in just 4 months.

At that point BDCS was at its lowest level since the UBS Exchange Traded Note, which owns virtually all BDC stocks, was brought to market in early 2011.

That day before Christmas low point was even lower than two prior crises of confidence that have come before: in the summer of 2011 and in early 2016.

Roll forward to the Christmas week of this year and there’s nothing like the same drama going on.

The metrics show a BDC sector just modestly pulling back after several weeks of a mini-rally.

BDCS closed this holiday-truncated week at $20.49, (0.34%) below the week before and at its lowest level in two weeks.

The number of BDCs trading up on the week was 20, while 25 were in the red.

In neither case were the price moves due to any changes in the fundamentals.

We believe the ORCC increase was due to re-balancing by investors in what is still a relatively thinly traded stock for technical reasons.

GAIN probably dropped because a recent run-up in its price made profit taking irresistible to some shareholders.

The only surprising element in the week was that the BDC sector was relatively weak while the S&P 500 continued to boom, up 0.58%.

Where the major indices go, the BDC sector will follow, but not every day or every week.

Although this was a quiet week price and news-wise, this was the last full week of the year so some full year recapping seems in order.

We doubt the Monday and Tuesday of December 30 and 31 will alter matters much.

The most obvious summary of 2019 is that it was mostly a Very Good Year for BDC investors.

The most useful indicator – because of the “Total Return” element is what happened to the Wells Fargo Index  (on which BDCS is built).

That’s not the sort of result that comes along every year.

Nonetheless- and as we’ve pointed out before – much of the great performance was front loaded and consisted of recovering lost ground ever since Christmas Eve 2018.

In fact, looking back on our weekly data and comparing the WF Index from August 31 2018 – just before the market slump – to last Friday the gain is just 10.0%.

That’s over a near 16 month period and comes to an annualized pace of 7.5%, or something below the average yield on BDC dividends.

In fact, and to switch to BDCS and price change, the sector is now (27%) below the heady days of November 2013 – six years ago – when the highest post-recession price of $28.00 was reached.

The moral here: notwithstanding an excellent year for the BDC sector from a numbers standpoint, in a broader context these are hardly halcyon days.

By our count, 25 BDCs have seen their book value per share drop between IVQ 2018 and IIIQ 2019, and only 20 have recorded an increase.

If we left out increases in book value from buying back stock and not fully distributing earnings, the number of BDCs with “organic” NAV Per Share growth would probably be in single digits.

Yes, there were very few BDCs permanently cutting distributions in the period (Medley Capital or MCC , though, managed to stop all payouts this year – a singular achievement).

A Little Help From Washington D.C.

However, many BDCs were boosted by the generous provisions of the Small Business Credit Availability Act (SBCAA), enacted in March 2018.

The higher leverage allowed by the SBCAA has allowed a number of BDCs that might otherwise have cut their dividends for lack of necessary “covering” earnings to keep pay-outs unchanged.

We calculate that total BDC portfolio assets have increased by 34% since the enactment of the new law.

Many individual BDCs have increased their portfolio size much more than that and without raising a single cent of new equity.

Most of that increase in assets – and the corresponding boost to income – came from borrowing more, as permitted by the SBCAA.

Within a year or so, the magic elixir of higher earnings that comes from growing a portfolio will be used up as BDCs reach their new “target leverage”.

The BDCs – and their investors – will have to contend with a much bigger pool of potential credit losses; acquired at a universally acknowledged frothy period in leveraged lending.

Dividend cuts are likely to be much larger than they would have been had the SBCAA never been instituted, and that follows for likely stock price changes.

Typically, the bigger the earnings downside, the larger the stock price change as investors seek to plumb how low they can go.

That’s low sector volatility by BDC standards and may not be repeated in the next couple of years.

Nor should this Very Good Year for the BDC sector blind us to poor fundamental performance at many individual players during a most propitious period for leveraged lending.

We’ve had the afore mentioned slow moving but inexorable decline at MCC, whose story continues to be written.

OHA Investment (OHAI) had to be dismantled and sold for scrap to Portman Ridge Financial (PTMN).

Before that, internally managed KCAP Financial had to admit its business model was not working and sold itself to that same Portman Ridge, a new player on the scene.

Poor performance at Alcentra Capital (ABDC) caused Bank Of New York to sell its management contract and the assets of the BDC to Crescent Capital.

Garrison Capital (GARS) had another unfortunate year, and has found disgruntled shareholders agitating for an Alcentra-like resolution.

Despite the support of its famous parent, BlackRock Capital Investment (BKCC) continued to slump throughout 2019, with no clear-cut end in sight.

(To be fair, some market participants seem to believe the worst is over and have boosted the stock price at year end as the chart below shows). 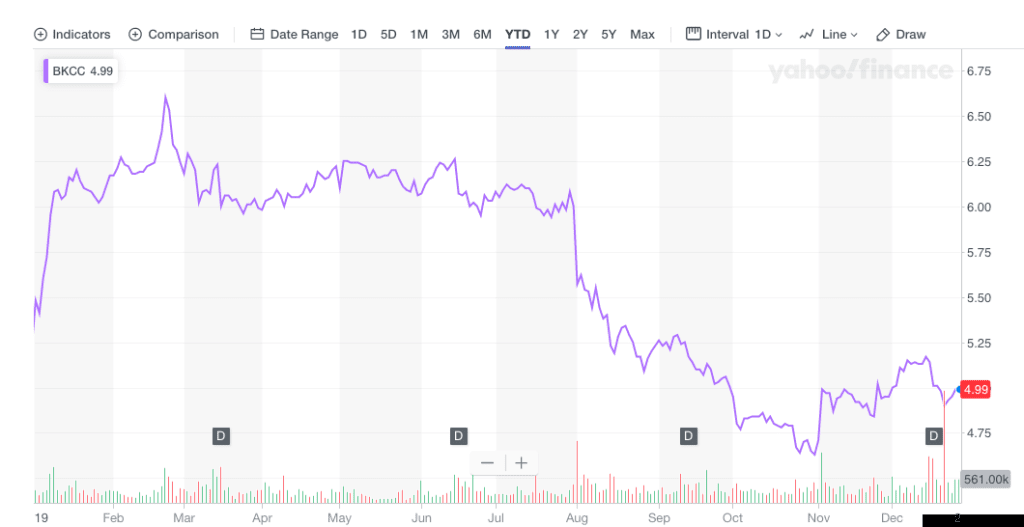 Harvest Capital (HCAP) was not able to deploy its capital from investment repayments fast enough and cut its distribution – one of only a handful of BDCs to do so and the only one for that reason.

The BDC, though, seems to have subsequently  recovered investor confidence, as this chart shows:

This is hardly a comprehensive list as space does not allow for one, and we want to keep with the spirit of the season.

Nonetheless, by our admittedly subjective count, roughly half of all public BDCs had a poor or mixed 2019 based on fundamentals such as earnings, book value and credit quality.

One could draw any number of conclusions from the above that would be useful going forward.

For our part, we believe that stock selection in the BDC sector remains essential for investors, both who to invest in and who to avoid.

Even with the departure of OHAI, there remains a wide selection of candidates to choose from, and more are likely to be coming in 2020.

We expect that with the higher stakes brought on by the almost universal adoption of the SBCAA and possibly tougher economic economic conditions we’ve known in recent years, the difference between individual BDC winners and losers will be that much greater going forward.

As always, the BDC Reporter will be covering all the public players: from behemoths to minnows and from the highly dependable to the much less so.

As ever, success or failure for every BDC will be highly dependent on the quality of credit underwriting.

Our coverage of BDC portfolio credit developments will be even better in 2020 as we track every under-performing company at every BDC.

We’ve spent much of the holiday period loading all the companies that are not meeting expectations into our database.

The goal is to provide our Premium subscribers with frequent updates on what might be going awry from a credit standpoint while continuing to cover all material sector trends.

Most Important Of All

With that said, we wish our readers a Happy New Year and look forward to continuing our work in 2020.