New-issue momentum continued to build last week, with a string of loan successes won off the back of typically robust early January market conditions that have been supercharged by retail inflows, while high-yield activity ramped higher as underlying U.S. Treasury rates stabilized from the recent run upward.

Launched loan activity rocketed higher this week to $27.4 billion, and despite $18.9 billion of M&A, there was a lot of churn in the mix, and net launched volume totaled only $9.8 billion across the week’s 17 transactions. By contrast, last week’s launches totaled $19.6 billion gross/$11.2 billion net. 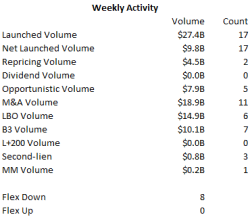 A Barclays-led arranger group last week set price talk of S+350, with a 0.50% floor and a 99.5 OID on the $500 million incremental term loan for AssuredPartners. The loan would not include a CSA. Proceeds will provide liquidity for near-term M&A activity and pay down revolver borrowings. The incremental debt will be coterminous, but not fungible, with the borrower’s existing term loans due February 2027. Lenders are offered six months of 101 soft call protection. Commitments are due by 5 p.m. ET on Tuesday, Jan. 25. Holders of the company’s 1L debt due February 2027 (L+350, 0.5% floor) include Blackstone Private Credit Fund with a total of $11.9M in principal, Owl Rock Core Income Corp. with almost $8M, and Palmer Square Capital BDC with nearly $4M.

A J.P. Morgan-led arranger group last week launched a $6.75 billion term loan strip backing Bain Capital and Hellman & Friedman’s $17 billion buyout of Athenahealth from Veritas Capital and Evergreen Coast Capital. The seven-year strip includes a $5.75 billion funded term loan and a $1 billion delayed-draw term loan. Talk is S+375-400 with a 50 bps SOFR floor and a 99.5 offer price with six months of 101 soft call protection. The loan will include 25 bps leverage based step-downs at 0.25x and 0.50x inside closing date first-lien net leverage as well as a 25 bps IPO step-down. Ticking fees are 50% of the margin for days 90-180, rising to 100% of the margin on day 181. The commitment deadline is 5 p.m. ET on Wednesday, Jan. 26. Blackstone Private Credit Fund holds $19.2M of the existing first-lien term loan due February 2026 (L+425, 0% floor), and Palmer Square Capital BDC holds $5.3M.

An Antares Capital-led arranger group set a Feb. 1 deadline for Dessert Holdings’ first- and second-lien add-on term loan. Arrangers set an offer price range of 99.25-99.5 on the $430 million add-on first-lien term loan, while the $135 million second-lien tack-on is outlined at 98.27-98.5. The incremental loans, which funded late last year, will be fungible with the borrower’s existing first- and second-lien loans. The existing first-lien term loan due 2028 is priced at L+400 with a 0.75% floor, and the second-lien due 2029 is priced at L+725 with a 0.75% floor. Add-on proceeds, along with incremental equity from Bain Capital and a sale-leaseback transaction, will be used to finance the acquisition of Steven-Robert Originals. The issuer will reset the 101 soft call protection the upsized $827.9 million first-lien term loan. Holders of the company’s existing 1L debt include Audax Credit BDC with $1.5M, OFS Capital with $1.1M and ORCC  Senior Loan Fund with $20.2M.

Antivirus software company McAfee has launched $4.41bn and $1.25bn euro-equivalent seven-year TLBs to finance its acquisition by an investor group comprising Advent International, Permira, Crosspoint Capital Partners, Canada Pension Plan Investment Board, GIC, and ADIA. Proceeds, together with equity from Advent, Permira, Crosspoint, and CPPIB, will fund the acquisition and refinance existing debt. The dollar leg is guided at SOFR+CSA+375-400bps/0.50%/99.50 (CSA at 10/10/10bps) and the euro leg at E+400-425bps/0%/99.50. Replies are due by noon NY time/17:00 UK time on February 2. The dollar leg comes with two 25 bps step-downs based on first-lien net leverage while the euro leg comes with three. There is also one 25 bps margin step-down upon the consummation of an IPO. Both legs come with 10 soft call protection for six months. A group led by J.P. Morgan is arranging the financing. The investor group agreed to take the security software concern private for $26 per share in an all-cash transaction, valued at approximately $12 billion on an equity value basis and over $14 billion on an enterprise value basis after taking into account the repayment of McAfee debt. The sponsors will be kicking in $5.2 billion of equity, in addition to $800 million of preferred equity provided by PSP Investments and Neuberger Berman. Holders of the first-lien debt due September 2024 (L+375, 0% floor) include Palmer Square Capital BDC with $3.1M, Prospect Flexible Income Fund with $184K and First Eagle Logan JV with nearly $3M.

J.P. Morgan, Golub Capital and Barclays last week launched $230 million of add-on first- and second-lien term loans for Precisely, proceeds of which would be used be used to fund the acquisition of PlaceIQ and repay revolver borrowings. The issuer is seeking a $200 million fungible add-on to its first-lien term loan due April 2028 (L+400, 0.75% floor) and a $30 million fungible tack-on to its second-lien term loan due April 2029 (L+725, 0.75% floor). The incremental first-lien debt is offered at 99.5-99.75 and the second-lien at 99.75-100. The first-lien term loan includes 101 soft call protection that rolls off in April and the second-lien carries 102 hard call protection, which steps down to 101 in April. Holders of the first-lien loan include Audax Credit BDC with $2.5M, Nuveen Churchill with $6.3M, and First Eagle Logan JV with $2M.

BofA Securities last week set price talk of S+300 with a 0.50% floor and a 99.75 OID on the refinancing for Alight Solutions. The loan would not include a CSA. Lenders are offered six months of 101 soft call protection. The approximately $1.956 billion term loan being targeted in the refinancing would be coterminous with the existing roughly $523 million incremental term loan due August 2028, which is being amended as part of the deal and the two loans will be combined to create a pro forma $2.479 billion tranche. The refinancing would reduce pricing and extend the maturity of the 2026 loan, as well as shift the issuer to SOFR-based pricing. The $1.956 billion loan being refinanced matures in October 2026 and is priced at L+325, with a 0.50% floor. The $523 million incremental loan being amended is offered at par and is currently priced at L+300, with a 0.50% floor. Commitments are due by noon ET on Tuesday, Jan. 25. Steele Creek Capital Corp. holds $1M of the first-lien loan due August 2028 (L+300, 0.5% floor).