With the pace of M&A launches slowing, launched new-issue volume came off the prior week’s torrid pace, landing at $16.1 billion/$11.6 billion net from $27.4 billion/$9.8 billion a week earlier. M&A volume slumped to a still reasonably robust $8.4 billon but down from $18.9 billion the week before, underscoring concerns that February’s volume could slow further, potentially opening the door to a rush of opportunistic business. 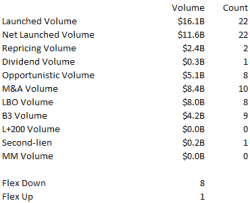 A Deutsche Bank-led arranger group accelerated the commitment deadline on the $75 million add-on first-lien term loan for Ankura Consulting Group by two days, to 5 p.m. ET today. There was no update to price talk of 99.5. The incremental debt would be fungible with the existing covenant-lite first-lien term loan due March 2028 as that loan shifts to SOFR-based pricing at S+450, retaining its 0.75% floor, from L+450 currently. The loan would include a CSA of 10/15/25 for one-month, three-month and six-month SOFR, respectively. Proceeds would fund future acquisitions. In March, Ankura priced a refinancing comprising the originally $465 million first-lien term loan and an originally $175 million second-lien term loan due March 2029 (L+800, 0.75% floor). Holders of the company’s existing 2L debt include Oaktree Specialty Lending Corp. with $7.5M and Oaktree Strategic Income II with $2.4M.

TD Securities set talk of S+475 with a 1% floor and a 99.25 offer price on the $55 million add-on term loan B for Conterra Ultra Broadband. The issuer will shift to SOFR based pricing on the existing term loan due 2026 (L+475, 1% floor). The CSA is at 10 bps/15 bps/25 bps for one, three and six months. The loan’s 101 soft call protection will expire in June. Proceeds of the add-on repay RC borrowings and fund cash to the balance sheet to fund growth. Commitments are due on Feb. 1. Bain Capital Specialty Finance holds $6.3M of the existing first-lien debt, while AB Private Credit holds $6.5 million of the existing second-lien term loan due April 2027 (L+850, 1% floor).

Antivirus software company McAfee has launched $4.41bn and $1.25bn euro-equivalent seven-year TLBs to finance its acquisition by an investor group comprising Advent International, Permira, Crosspoint Capital Partners, Canada Pension Plan Investment Board, GIC, and ADIA. Proceeds, together with equity from Advent, Permira, Crosspoint, and CPPIB, will fund the acquisition and refinance existing debt. The dollar leg is guided at SOFR+CSA+375-400bps/0.50%/99.50 (CSA at 10/10/10bps) and the euro leg at E+400-425bps/0%/99.50. Replies are due by noon NY time/17:00 UK time on February 2. The dollar leg comes with two 25 bps step-downs based on first-lien net leverage while the euro leg comes with three. There is also one 25 bps margin step-down upon the consummation of an IPO. Both legs come with 10 soft call protection for six months. A group led by J.P. Morgan is arranging the financing. The investor group agreed to take the security software concern private for $26 per share in an all-cash transaction, valued at approximately $12 billion on an equity value basis and over $14 billion on an enterprise value basis after taking into account the repayment of McAfee debt. The sponsors will be kicking in $5.2 billion of equity, in addition to $800 million of preferred equity provided by PSP Investments and Neuberger Berman. Holders of the first-lien debt due September 2024 (L+375, 0% floor) include Palmer Square Capital BDC with $3.1M, Prospect Flexible Income Fund with $184K and First Eagle Logan JV with nearly $3M.

A Deutsche Bank-led arranger group has accelerated the deadline on the $2.52 billion cross-border term loan backing Brookfield Business Partners’ planned acquisition of Scientific Games’ lottery services and technology business by 24 hours, to 10 a.m. ET on Thursday, Feb. 3. There’s no update to guidance of S+375-400 with a 0.50% floor and a 99.5 OID on the $1.77 billion tranche. The dollar loan would not include a CSA. Talk on the approximately €662 million ($750 million) loan is E+425, with a 0% floor, offered at 99-99.5. Brookfield in late October agreed to purchase the unit from Nasdaq-listed Scientific Games for $5.825 billion in cash, with an earn-out of up to $225 million based on the achievement of certain EBITDA targets in 2022 and 2023. The transaction is expected to close in the second half of 2022. Lenders are offered a ticking fee of half the margin that would kick in 61 days post allocations, rising to the full margin on day 121. Pro forma leverage would run 5.6x through the term debt and roughly 7.6x through $880 million of other unsecured debt. Equity would total $2.494 billion, comprising about 42% of total capitalization. The seven-year loan would include six months of 101 soft call protection. The issuer is seeking a six-month sunset on 100 bps of MFN protection. Blackstone Private Credit fund holds about $3.8M of Scientific Games’ 1L debt due August 2024 (L+275, 0% floor).

Credit Suisse accelerated the commitment deadline for symplr‘s $250 million add-on term loan by one day to noon ET on Tuesday, Feb. 1. There was no change to the proposed 99.75 OID. The incremental loan is talked at S+450 with a 0.75% floor and a CSA set at a flat 10 bps regardless of tenor. Note the borrower’s existing loan, currently priced at L+450 with a 0.75% floor, will transition to SOFR as part of the transaction. The incremental debt will be fungible with the existing term loan due December 2027. The proceeds would fund the acquisition of Midas Health Analytics Solutions. Symplr earlier this month agreed to purchase the Midas business from Conduent for $340 million; closing is expected in the first quarter. The issuer will also fund the transaction with a $90 million privately placed second-lien loan. Holders of the existing first-lien debt include Audax Credit BDC with $1.5M. Holders of the existing second-lien loan due December 2028 (L+788, 0.75% floor) include Ares Capital with $69.9M and AB Private Credit Investors with $2.9M.

A Deutsche Bank-led arranger group set price talk of S+350, with a 0.50% floor and a par offer price on the proposed repricing of White Cap’s $2.312 billion term loan. The existing loan due October 2027 is currently priced at L+400 with a 0.50% floor. The issuer is offering to reset the 101 soft call protection for six months. There is no CSA on the repriced loan. Deutsche Bank, RBC Capital Markets, Regions, Wells Fargo, U.S. Bank, BNP Paribas, Credit Suisse, Goldman Sachs and Mizuho are arranging the loan. Commitments are due by noon ET on Tuesday, Feb. 1. Palmer Square holds nearly $5M of the existing 1L debt while Blackstone Private Credit Fund holds about $23.9M.