New-issue loan volume held steady with an upswing in opportunistic activity driving deal flow last week amid generally supportive conditions, while accounts started kicking the tires on the first fully SOFR-based transactions to hit syndication. High-yield issuance picked up over the previous week, like loans offering a mix of merger and refinancing-related business.

Loan arrangers rolled out $17.4 billion of new business last week from 23 issuers, and $8.8 billion on a net basis. Where recent weeks have been heavily focused on M&A, more than half of last week’s deals were opportunistic for $10.5 billion of volume in what is likely a preview of the weeks ahead. Although activity was far from dynamic, conditions remained broadly issuer-friendly, resulting in seven deals tightening against two widening following the previous Friday’s surge of upward flexes. 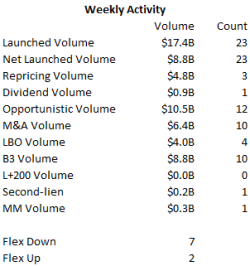 A J.P. Morgan-led arranger group is offering the $475 million add-on to Alliant Holdings’ term loan B-3 at 99.75-100. The specialty insurance broker’s TLB-3 due November 2027 is priced at L+375 with a 0.5% floor. The add-on would increase pro forma size to $1.7 billion, and the issuer will reset 101 soft call protection for six months. Proceeds along with $475 million of other secured debt, $450 million of other unsecured debt and new equity will fund a partial equity recapitalization among existing investors, fund acquisitions under letters of intent and fund general corporate purposes. Commitments are due at 5 p.m. ET Wednesday, Oct. 20. Holders of the existing term debt due 2027 include Blackstone Private Credit Fund with $14M in principal amount, Palmer Square Capital BDC with $5.5M and Owl Rock Core Income Corp. with $4M. Blackstone Private Credit Fund also holds $10M in principal amount of the company’s term debt due May 2025 (L+325, 0% floor).

An arranger group including J.P. Morgan and KKR Capital Markets launched a $1.5 billion term loan B for AppLovin, proceeds of which would be available for general corporate purposes including acquisitions. The seven-year loan is talked at L+300-325 with a 0.50% floor and a 99.5 OID; lenders are offered six months of 101 soft call protection. Commitments are due by noon ET Thursday, Oct. 21. As of June 30, the issuer had $1.79 billion outstanding under its existing term loan due August 2025, SEC filings show. Pricing is currently L+325 with a 0% floor, versus L+375 at the time of a February add-on and repricing; since then, the issuer has achieved both leverage- and IPO-related step-downs. The loan includes a step back up to L+350 at 3.5x first-lien leverage. BofA Securities is administrative agent. Palmer Square Capital BDC holds $4.9M of the existing debt.

A J.P. Morgan-led arranger group set talk of L+475-500 with a 0.5% floor and a 99 offer price on the $1.3 billion seven-year term loan B for Anthology via Astra Acquisition Corp. that funds its acquisition of Blackboard. The loan carries six months of 101 soft call protection. The loan would also put cash on the balance sheet and refinance Anthology’s existing $322 million first-lien term loan B due 2027 (L+425, 0.75% floor) and a $110 million second-lien term loan due 2028 that was placed privately. Commitments are due by 5 p.m. ET Wednesday, Oct. 20. Holders of Anthology’s existing debt include New Mountain Finance Corp. with $22.3M, New Mountain Guardian III BDC with $10.6M, NMF SLF I with $25.3M and NMFC Senior Loan Program III with $16.4M.

Jefferies launched a $200 million add-on term loan for Idera. Proceeds would fund an acquisition. The incremental debt is talked at 99.5-99.75. It would be fungible with the borrower’s existing covenant-lite term loan due March 2028 (L+375, 0.75% floor). Pro forma for the add-on, the first-lien term loan would grow to about $1.456 billion. The issuer is offering to reset the 101 soft call protection for six months. Commitments are due by 4 p.m. ET Tuesday, Oct. 19. Holders of the existing 1L term debt due 2028 include Blackstone Private Credit Fund with $30.4M in principal amount, Audax Credit BDC with $2.6M, Palmer Square Capital BDC with $6.4M and NMFC Senior Loan Program III with $16M. Holders of the company’s 2L term debt due 2029 include BC Partners Lending Corp. with $4M, BlackRock Capital Investment Corp. with $2.9M, BlackRock Direct Lending Corp. with $1.1M, Blackstone Private Credit Fund with $35.4M, Morgan Stanley Direct Lending Fund with $3.9M, New Mountain Finance with a combined $25.5M, New Mountain Guardian III BDC with $26.3M, SL Investment Corp. with $530K and Portman Ridge Finance Corp. with $6M.

A BofA Securities-led arranger group set a 99 OID on the $575 million add-on term loan for McGraw Hill supporting the company’s acquisition of Achieve3000. The incremental debt will be fungible with the borrower’s existing $1.55 billion term loan due July 2028 (L+475, 0.50% floor), which is covered by 101 soft call protection through July 30, 2022. The commitment deadline is noon ET Wednesday, Oct. 20. BofA, BMO Capital Markets, Macquarie, BNP Paribas, Deutsche Bank, PNC and UBS are arranging the loan. McGraw Hill in late August agreed to purchase Achieve3000, a differentiated instruction and learning acceleration for PreK-12 students in all 50 U.S. states and 49 countries. Financial terms were not disclosed. The transaction is expected to be completed in approximately 60 days, according to a company statement. Holders of the company’s existing 1L debt include Guggenheim Credit Income Fund with $1.6M and OFS Capital with $2M. Guggenheim Credit Income Fund also holds $1.3M of the company’s 8% senior notes due November 2024.

A BofA Securities-led arranger group set price talk of L+325-350 with a 0.50% floor and 99.5 OID on MeridianLink’s $435 million term loan B. Commitments are due by 5 p.m. ET Wednesday, Oct. 27. The seven-year facility will carry six months of 101 soft call protection. Proceeds will be used to refinance the issuer’s existing credit facilities. MeridianLink last tapped the market in November with a $100 million add-on term loan to fund two acquisitions. The borrower also has a $350 million covenant-lite term loan due 2025, which is fungible with a $60 million add-on that was syndicated in 2019. Antares is administrative agent. Blackstone Private Credit Fund holds $25M of the 1L debt due May 2025 (L+375, 1% floor).

J.P. Morgan launched a repricing of Precisely’s existing $2.205 billion first-lien term loan due April 2028 alongside a $50 million fungible add-on. Price talk has been set at L+400 with a 0.50% floor and 99.875-100 offer price. Current pricing is L+425 with a 0.75% floor. The issuer is offering six months of 101 soft call protection; the soft call protection rolls off the existing loan this month. Commitments are due noon ET Monday, Oct. 18. Proceeds from the add-on will fund general corporate purposes. Pro forma for the add-on, the tranche would grow to $2.255 billion. Holders of the company’s existing 1L debt include Audax Credit BDC with $2.5M in principal amount, Nuveen Churchill BDC with $10.3M, First Eagle Logan JV with $2M and Portman Ridge Finance Corp. with $2.4M.

Jefferies, BofA Securities and Credit Suisse set price talk on the $725 million first- and second-lien financing backing Patient Square Capital’s planned acquisition of Summit Behavioral Health. Talk on the first-lien term debt is L+400-425, with a 0.75% floor and a 99.5 OID; the tranche would include one leverage-based step-down and one IPO-related step-down. Guidance on the second-lien is L+700-725, with a 0.75% floor and a 99 offer price. Commitments are due by 2 p.m. ET Thursday, Oct. 28. Golub Capital BDC holds a combined $30.3M in drawn principal amount of the company’s 1L debt due October 2023 (L+500, 1% floor) together with equity stakes valued at a combined $319K.

J.P. Morgan revised the CSA on its repricing and $39 million fungible add-on to Traverse Midstream Partners’ term loan B due September 2024 in line with the Walker & Dunlop transaction. The CSA is now 10 bps one-month SOFR, 15 bps for three months and 25 bps for six months, versus a flat 10 bps as initially outlined. Talk is SOFR+CSA+425 subject to a 1% floor (SOFR+CSA), with a 99.5 offer price. The upsized $1.35 billion term loan would include six months of 101 soft call protection. Proceeds of the $39 million add-on will repay existing deferred capital call. The existing $1.311 billion term loan would be repriced from L+475 with a 1% floor; pricing was increased from L+400 via an early 2020 amendment that permitted the issuer to make capital calls to the Rover Pipeline for previously incurred construction costs, permitted the sale of Traverse’s 25% interest in its Ohio River System joint venture and required an additional $75 million of mandatory amortization payments. Holders of the company’s 1L debt due September 2024 include FS Energy & Power Fund with $10.9M and Palmer Square Capital BDC with $5.2M. – Thomas Dunford