Monotype Imaging to reduce margin on debt held by BC Partners Lending Corp.

With M&A activity cycling down heading in the final two months of the year, opportunistic loan business is on the upswing, though a muted tone ruled early last week as investors absorbed the previous week’s huge slate of allocations. Launch activity accelerated later in the week presenting a nearly even balance between pressing merger business and opportunistic deal flow. High-yield issuance cooled, but Teva Pharmaceutical Industries launched a $4 billion sustainability-linked offering for pricing this week.

Issuers rolled out $9.8 billion of loans last week from 15 issuers, considerably less than the previous week’s $13.5 billion and heavier launch volume in the preceding weeks. With $4.2 billion of opportunistic activity, including $1.5 billion of fresh repricings in the mix, net launched volume stands at $5.7 billion. And in a head-turning move after several weeks of heavy deal flow produced extensive upward and downward moves, last week’s swing back to an issuer-friendly flex ratio of 8:0 may turn out to be a bit of a head fake; several transactions were in price discovery and others landed at the wide end of guidance during the week. 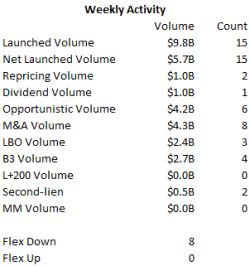 BofA Securities set a 99-99.5 offer range on the $100 million add-on term loan B for Acuren. The financing would support the issuer’s acquisition of Premium Inspection and Testing Inc., a regional provider of nondestructive testing, inspection and technical integrity services. The incremental debt would be fungible with the existing term loan B due January 2027 (L+400, 0% floor). BofA is administrative agent. Note that the loan would step back up L+425 at greater than 3.5x first-lien net leverage. The issuer is offering to reset the 101 soft call protection for six months. The commitment deadline is 10 a.m. ET Thursday, Nov. 4. Audax Credit BDC holds $481K in principal amount of the existing term debt.

J.P. Morgan launched a $250 million add-on term loan for Howden. Proceeds would fund the issuer’s planned acquisition of Compressor Products International, replenish balance sheet cash used for the acquisition of Spencer Turbine and fund general corporate purposes. The arranger is circulating price talk of 99.125-99.375. Once funded, the incremental debt would be fungible with the borrower’s existing $957 million term loan due September 2026 (L+400, 0% floor). Lenders are offered a ticking fee of half the margin beginning on day 46 post allocations, rising to the full margin on day 91. Commitments are due by 5 p.m. ET Thursday, Nov. 4. First Eagle Logan JV holds $2.9M in principal amount of the existing term debt.

A Jefferies-led arranger group today launched a $600 million first-lien term loan and a $100 million delayed-draw first-lien term loan for Holley Performance Products, in addition to a $125 million five-year revolver. Proceeds will refinance debt. The issuer is offering six months of 101 soft call protection on the first-lien term loan, which will have a seven-year maturity date. The delayed-draw term loan will have six months of availability. Wells Fargo, BofA Securities and Truist are joining Jefferies as co-arrangers. Holley last tapped the secondary markets in October 2018 with a $380 million term loan B due 2025 (L+500, 0% floor), which supported its acquisition by Sentinel Capital Partners. Barings BDC holds $16.9M in principal amount of the existing term debt.

Deutsche Bank launched a repricing of Monotype Imaging’s $488 million term loan B due Oct. 2026, guided at L+500 with a 0.75% floor at 99.5. Current pricing on the originally $425 million term loan is L+550 with a 0% floor, while an originally $80 million nonfungible coterminous incremental term loan is priced at L+600 with a 1% floor. The issuer is offering to refresh the 101 soft call protection for six months. Commitments from existing lenders are due by 5 p.m. ET Thursday, Nov. 4, while the deadline for new lenders is 10 a.m. ET Friday, Nov. 12. BC Partners Lending Corp. holds $3.9M in principal amount of the existing term debt.

Accounts received allocations of the $130 million add-on term loan for Resonetics (L+400, 0.75% floor), which was issued at 99.75. Credit Suisse was left lead on the transaction, which priced tight to talk. Proceeds will provide acquisition financing. Resonetics is a contract manufacturer specializing in micro manufacturing for the medical technology industry. The company is owned by GTCR portfolio company Regatta Medical. Blackstone Private Credit Fund holds $12.5M in principal amount of the existing 1L debt. Holders of the company’s 2L debt due April 2029 (L+700, 0.75% floor) include Barings BDC with $2.1M, Barings Capital Investment Corp. with $968K and Barings Private Credit with $5.4M.

A BofA Securities-led arranger group set talk of L+450-475 with a 0.5% floor and a 99 offer price on the $1.25 billion term loan B for United Site Services. The issuer also is raising $550 million of first-lien notes due 2028 and $750 million of senior notes due 2029 as well as a $200 million ABL revolver that won’t be funded at close. Proceeds will help fund the $3.75 billion acquisition of the business, already owned by Platinum Equity via its Platinum Equity Capital Partners Fund IV, to a new Platinum Equity continuation fund, and refinance debt. New and rolled equity will total $1.4 billion. Moody’s notes that Platinum GP and the new investors will also provide $200 million of unfunded capital commitments to support the company’s acquisition strategy. The seven-year loan includes six months of 101 soft call protection. Blackstone Private Credit Fund holds $12.9M in principal amount of the company’s 1L debt due August 2024 (L+375, 1% floor).

An arranger group led by RBC Capital Markets outlined first-lien talk of L+400 with a 0.75% floor and a 99 offer price on the deal backing Vertex Aerospace’s acquisition of business lines from Raytheon Technologies. The deal includes an $890 million seven-year first-lien term loan and a $220 million eight-year second-lien term loan that has been placed privately. The issuer will upsize its ABL revolver to $100 million from $75 million. Proceeds also refinance the issuer’s existing debt. The commitment deadline is noon ET Tuesday, Nov. 9. Underwriters include RBC, Morgan Stanley, Credit Suisse, MUFG and Citizens. Business Development Corp. of America holds $10.1M in principal amount of the company’s 1L debt due June 2027 (L+400, 0% floor).