With the window to clear deals ahead of Thanksgiving beginning to close, underwriters unleashed a massive number of deals with a notable shift toward opportunistic activity, all told generating some $50 billion of volume from roughly four dozen issuers across loans and bonds.

The loan market’s tone remained highly constructive during the holiday-truncated week, though there was credit-specific pushback for several new issues and repricings. The week was also notable for substantial recaps, second-lien activity and the launch of SOFR-based transactions.

Opportunistic volume of $24 billion drove gross launched volume to a massive $35.4 billion across 36 issuers last week. With some opportunistic deals that represent material fresh dollars to the asset class in the mix alongside some M&A, net launched volume clocked in at an impressive $15 billion. 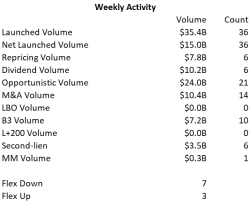 A Deutsche Bank-led arranger group set talk of SOFR+CSA+475-500 with a 0.75% floor and a 99 offer price on the $520 million term loan B for American Physician Partners that will refinance debt and fund acquisitions under letters of intent. The CSA is set at 10 bps for one month, 15 bps for three months and 25 bps for six months. The seven-year TLB will include six months of 101 soft call protection. Arrangers are DB, Regions and Nomura. Commitments will be due at 5 p.m. ET Monday, Nov. 22. Holders of the company’s existing 1L debt due December 2021 (L+675, 1% floor) include AB Private Credit Investors with $9.8M in principal amount, CG BDC with $28.3M, TCG BDC II with $38.6M and Middle Market Credit Fund II LLC with $8.5M.

A Goldman Sachs-led arranger group set talk L+350 with a 0.5% floor and a 99-99.5 offer price on the $750 million fungible incremental first-lien loan due 2028 for Ascensus backing its acquisition of Newport Group. The $100 million fungible incremental second-lien term loan due 2029 is talked at L+650 with a 0.5% floor at 99.5. The first-lien loan carries 101 soft call protection through February 2022, while the second-lien is callable at 102 through August 2022, stepping to 101 for the following year. First-lien ticking fees are 50% of the margin for days 46-90 and rise to 100% of the margin thereafter. The commitment deadline is 5 p.m. ET Thursday, Nov. 18. Barings Capital Investment Corp. holds $7.5M in principal amount of the company’s existing 2L debt.

J.P. Morgan launched a repricing of Great American Outdoors Group’s $4.466 billion term loan due 2028. The arranger is circulating price talk of L+375-400 with a 0.75% floor and a par offer price. The issuer, formerly Bass Pro Shops, is offering to reset the 101 soft call protection for six months. The current coupon is L+425 with a 0.75% floor. Commitments are due by 5 p.m. ET Wednesday, Nov. 17. OFS Capital holds $5.7M in principal amount of the existing 1L debt.

J.P. Morgan launched a $400 million fungible add-on to CoreLogic’s first-lien term loan due 2028. Proceeds will refinance revolver borrowings and fund cash to balance sheet, sources said. Pricing is L+350 with a 0.5% floor. The new money is offered at 99.25-99.5. Commitments are due at 5 p.m. ET Wednesday, Nov. 17. Holders of the company’s 1L debt due 2028 include Palmer Square Capital BDC with $3.5M in principal amount, Blackstone Private Credit Fund with $20M and Owl Rock Core Income Corp. with $15M. Holders of the 2L debt due 2029 include Ares Capital Corp. with $155.7M, Business Development Corp. of America with $10.8M and Franklin BSP Capital with $4.6M. Ares Capital Corp. also holds an equity stake valued at $59.7M.

Jefferies, Goldman Sachs and J.P. Morgan set price talk of L+400-425 with a 0.75% floor at 99-99.5 OID on Lucid Energy’s $1.5 billion senior-secured first-lien term loan. Proceeds of the seven-year facility will be used along with balance sheet cash to repay the issuer’s $1.04 billion term loan B due 2025 and $80 million term loan C due 2023, in addition to funding a roughly $425 million dividend to shareholders, according to a recent Moody’s report. Commitments are due by 5 p.m. ET Friday, Nov. 19. The borrower is simultaneously upsizing its five-year superpriority senior secured revolver to $150 million from $100 million and extending its maturity to 2026, according to the Moody’s report. The facility will be subject to super senior leverage and debt service coverage ratios. Steele Creek Capital Corp. holds $499K of the company’s 1L debt due February 2025 (L+300, 1% floor).

KKR Capital Markets, Jefferies and Credit Suisse are leading a $225 million incremental term loan B for Savers that will back an acquisition. A lender call is scheduled for 12:30 p.m. ET today. The issuer last tapped the market in April for a $600 million term loan (L+575, 0.75% floor) that backed the acquisition of the for-profit thrift store chain by current minority owner Ares Management. KCM was left lead and administrative agent on the seven-year deal. Holders of the existing 1L debt include Crescent Capital BDC with $20M in principal amount, MSC Income Fund with $12.9M and Main Street Capital Corp. with $12.9M.

J.P. Morgan launched a $180 million add-on term loan for Soliant Health that will fund a dividend to shareholders. The loan would be fungible with Soliant’s $299 million term loan B due 2028 (L+425, 0.75% floor) and is offered at 99-99.5 with six months of 101 soft call protection. Note the loan includes a 25 bps step-down at less than 3.75x first-lien leverage. Commitments are due at 5 p.m. ET Thursday, Nov. 18. Nuveen Churchill BDC holds $15M in principal amount of the company’s existing 1L debt. Apollo Investment Corp. holds an equity stake valued at $528K.

A Jefferies-led arranger group launched a $590 million first-lien term loan backing the proposed merger of CM Group and Cheetah Digital. The arrangers are circulating price talk of L+500-525, with a 0.75% floor and a 98.5 OID, sources said. The seven-year loan would include six months of 101 soft call protection. Jefferies, CIBC, Fifth Third and Golub Capital are arranging the loan. The issuer is also putting in place a $45 million revolver. Proceeds will finance the merger of the two companies and refinance debt at both companies. Hercules Capital holds a combined $10.3M of the company’s term debt due June 2024 (L+935, 1% floor).

A Morgan Stanley-led arranger group set price talk of L+400, with a 0.50% floor and a 99-99.5 OID on the $465 million term loan B for Snap One. The seven-year loan would include a 25 bps step-down at 3.25x net first-lien leverage, as well as six months of 101 soft call protection. Proceeds would be used to refinance debt. The issuer, formerly known as both SnapAV and WirePath, in July completed an IPO, repaying about $215.9 million of an incremental term loan due 2024 (L+475, 0% floor), reducing outstandings to $167.3 million. The issuer also has $284.3 million outstanding under the initial term loan due 2024 (L+400, 0% floor). NMFC Senior Loan Program I LLC holds $17M in principal amount of the initial term debt, while NMF SLF I Inc. holds $14.9M in principal amount of the incremental debt. – Thomas Dunford