The loan market showed resilience last week amid continued stock market volatility and as expectations of rate increases and outflows from high-yield mutual funds damped appetite for fixed-rate paper. The underlying bid for loans drove a big shift in product away from high-yield, particularly in high-profile M&A situations.

Launched loan volume slid to $8.7 billion across 13 issuers last week, for $6.2 billion on a net basis. Notably, new M&A deal flow dialed back to $4.2 billion as the sellside focused on a series of larger M&A transactions already in market, and pressures away from loans may have dissuaded some issuers from moving forward without greater clarity. The common wisdom of late has been that there’s a lack of substantial M&A flow once the current deals in market have been completed. 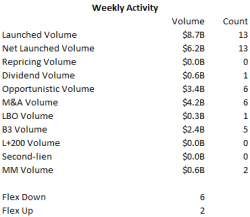 J.P. Morgan circulated price talk of S+425 with a 0.50% floor and a 99.5 OID on the $1.293 billion nonfungible incremental term loan backing Amentum’s planned acquisition of PAE. There is no CSA. The seven-year loan would include six months of 101 soft call protection. Commitments are due by 5 p.m. ET today. Amentum in late October agreed to acquire PAE in an all-cash transaction valued at $1.9 billion, including the assumption of debt. Closing is expected in the first quarter of 2022. The financing also includes a $550 million second-lien term loan, according to Moody’s. Amentum previously tapped the market in October 2020 for a $980 million incremental term loan due 2027 (L+475, 0.75% floor) to back its acquisition of DynCorp. Holders of that loan include Audax Credit BDC with$995K, Palmer Square Capital BDC with $1.5M and Steele Creek Capital Corp. with $995K. Holders of the first-lien debt due January 2027 (L+350, 0% floor) include Audax with $988K and Palmer Square with $4.4M.

An RBC Capital Markets-led arranger group set talk of S+575 with a 0.5% floor at 99 on the $270 million seven-year term loan B for FloWorks International, which would support its acquisition of SemiTorr Group. The CSA will be a flat 10 bps and investors are offered six months of 101 soft call protection. Commitments are due at noon ET on Feb. 15. SemiTorr is a specialty fluid handling systems and components distributor. FloWorks earlier this month announced its acquisition of the Tualatin, Ore.-based company, which was previously backed by Transom Capital Group. The additional arrangers are UBS, Wells Fargo, BNP Paribas, Jefferies and Audax. The financing also includes a $60 million asset-based revolving credit facility. FS KKR Capital Corp. holds a total of $74.9M of the existing first-lien debt due Oct. 2026 (L+700, 1% floor), while its FS KKR Credit Opportunities Partners JV holds $24.8M.

J.P. Morgan launched a $700 million incremental term loan for GardaWorld Security that will fund its acquisition of Tidel Engineering. The seven-year nonfungible term loan is talked at S+400 with a 0% floor at 99.5 with six months of 101 soft call protection. There’s no CSA. The commitment deadline is 5 p.m. ET on Thursday, Feb. 10. The issuer last tapped the market in November with a $350 million fungible add-on to its TLB due 2026 (L+425, 0% floor) to fund general corporate purposes. Blackstone Private Credit Fund holds $22.5M of that loan.

A Barclays-led arranger group today set price talk of S+525 with a 0.75% floor and a 99 OID on the $610 million term loan for NAPA Management Services Corp. The loan would include a CSA of 10 bps/15 bps/25 bps for one-month, three-month and SOFR, respectively. The seven-year loan would carry six months of 101 soft call protection. Proceeds will refinance debt and fund cash to the balance sheet. The company currently has about $555 million of debt outstanding, according to ratings reports. The issuer’s current debt includes a first-lien term loan due April 2023 (L+500), with holders including CION Investment Corp. with $5.3M. The current balance sheet also includes a second-lien term loan due October 2023 (L+1,000); holders include Ares Capital with $72.8M.

A J.P. Morgan-led arranger group launched a $300 million fungible add-on term loan for Solera Holdings backing its acquisition of Spireon Holdings, a provider of GPS-based solutions to commercial fleet, franchise dealership and independent dealership customers. The loan would be fungible with Solera’s U.S. dollar term loan B due June 2028 (L+400, 0.5% floor) and is offered at 99-99.5. Note that Goldman Sachs is administrative agent. Commitments are due by noon ET on Wednesday, Feb. 8. FS KKR Capital Corp. holds $312.4M of the second-lien term loan due June 2029 (L+800, 1% floor).

A BofA Securities-led arranger group bumped up the deadline on the $590 million term loan for Virtusa to noon ET tomorrow, Feb. 8. Proceeds, along with those from a $130 million fungible add-on to its 7.125% notes due 2028, will fund a dividend. There’s no update to price talk of S+375-400 with a 0.75% floor at 99-99.5. The CSA is set at 10 bps/15 bps/25 bps for one-month, three-month and six-month SOFR. The seven-year loan would include six months of 101 soft call protection. Arrangers are BofA, Barclays, Goldman Sachs, Deutsche Bank, HSBC and Nomura. The issuer in September repriced its $599 million term loan due 2028 to L+375 with a 0.75% floor, also via an arranger group led by BofA Securities. Existing holders are offered a 50 bps consent fee. Blackstone Private Credit Fund holds about $17.4 million of the existing first-lien debt.

J.P. Morgan launched a $175 million add-on first-lien term loan for The Knot, proceeds of which would be used to refinance the issuer’s second-lien term loan. Also as part of the transaction, the issuer is amending its existing $437 million first-lien loan to migrate to SOFR-based pricing and revise the change-of-control language, among other documentation changes. Price talk is S+450, with a 0% floor and a 99.5 OID on the new money; the CSA is a flat 10 bps regardless of tenor. Lenders to the existing loan, currently priced at L+450 with a 0% floor, are offered a 25 bps consent fee. It would include two 25 bps leverage-based step-downs, set at a quarter-turn and half-turn inside total first-lien net leverage, respectively. The 101 soft call protection would be refreshed for six months on the pro forma $611 million tranche, which would have the same December 2025 maturity as the existing loan. Holders of the existing second-lien debt include Crescent Capital BDC with $5M.