Power Solutions’ cross-border loan-and-bond deal was the focal point of last week’s activity, with loan demand magnified by the lack of available product elsewhere and both the secured and unsecured bonds playing well amid a bull-market run. Indeed, several other issuers pushed ahead with secured bonds as last week’s high-yield volume raced north of $10 billion, further depressing loan activity.

As expected, Power Solutions came together tight to talk with few meaningful documentation concessions to investors, and fine tuning ahead of expected pricing today reshuffled tranching to take advantage of U.S. loan demand. The dollar term loan grew by $1 billion, to $4.2 billion amid chatter that the loan had twice oversubscribed its initial target. Pricing is poised to capture the tight end of revised guidance, L+350 at 99, versus original guidance at L+400-425 at 98.5. The $2.25 billion-equivalent euro term loan tightened to E+375, with a 0% floor, at 99.5, versus revised guidance of E+400, and an OID of 99.5, and original talk of E+400-425 at 99.

With the downsize shift, leaving just $1 billion of seven-year secured notes next to the original plan for €660 million mirror issue, price guidance was respectively chopped a quarter of a turn, to 6.25%, and an eighth of a turn, to 4.375%, bringing an eventual print to nearly 100 bps less that the initial whispers of 7%–7.25% and 5%–5.25%, respectively, when launched to European roadshows in the week prior. Meanwhile, the $1.95 billion of eight-year unsecured notes held at the middle of whispers, at 225 bps more than secured, for roughly 8.5%. Pricing was expected this morning after an over-the-weekend delay following multiple tiers of oversubscription across the tranches despite aggressive price points and structures. Ratings are Ba3/B+/BB secured and B3/B/B- unsecured.

It’s a large, liquid, new-money deal that offers a healthy pickup to some market comps. Energizer 7.75% 2027 senior notes, for instance, have been trading around 106, for roughly 6.5%, albeit with B2/B+ ratings and a disposable battery and consumer-products focus, versus the automotive battery marketplace as per the JCI/Panther business. And the big M&A trade this year—$4 billion of first-lien 6.25% notes due 2026 from TransDigm Group—remained deeply in demand since its successful sale in late January, with round-lot trades changing hands at 103 on Friday, for roughly 5.5%, trade data showed, from 102 the week prior, and approximately 5.75%.

While B1/B+/B+ corporate ratings here are better than the typical single-B loan fare seen in recent months, the U.S. dollar term loan is bound to exert gravity on spreads for large liquid deals. At L+383 all-in, the deal is a full point inside the average all-in pricing for 2B deal stripping out add-ons, currently L+485. 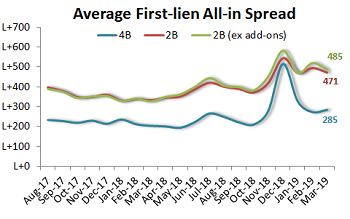 A Citi-led arranger group launched a $300 million term loan CONSOL Energy that refinances the issuer’s existing loan into a longer dated deal while lowering pricing from L+600 to a range of L+400-425. The 5.5-year covenant-lite term loan is offered at par, but the existing term loan due November 2022 is callable at 102 currently. The issuer also is extending the maturity of its $75 million term loan A and $350 million revolver. The new term loan B, which will carry 12 months of 101 soft call protection, also would lower the floor to 0% from 1%. The deal includes a 75% excess cash flow sweep with stepdowns. Incremental facilities include a $50 million free-and-clear tranche with additional amounts up to 1.5x gross first-lien leverage. MFN protection is 50 bps for life. Arrangers are Citi, PNC, Huntington, Credit Suisse and Bank of America Merrill Lynch, sources said. Commitments are due March 20.Business Development Corp. of America holds $3.2M of the company’s existing 1L debt.

Credit Suisse set talk of L+475-500 with a 0% floor and a 99 offer price on the $550 million term loan B for IT services concern Datto. Proceeds of this debut financing into the institutional market will refinance debt. The seven-year covenant-lite term loan will include six months of 101 soft call protection. Commitments will be due Thursday, March 28. Vista Equity Partners acquired the company in December 2017 backed by private financing, which includes first-lien term debt due December 2022 priced at L+800 with a 1% floor. Holders of the existing 1L debt include BlackRock TCP Capital Corp. with $27.8M in principal amount, Goldman Sachs BDC with $35.9M, Goldman Sachs Middle Market Lending Corp. with $55.9M, Goldman Sachs Private Middle Market Credit Corp. with $59.3M, Oaktree Specialty Lending Corp. with $35M, Solar Capital with $25M, TCG BDC with $35.6M, Golub Capital BDC with $11.2M and Golub Capital Investment Corp. with $14.1M.

RBC Capital Markets today circulated talk of a 99 OID for Newport Group’s $63.5 million add-on term loan, which will fund an acquisition. The incremental facility is fungible with the issuer’s existing $240 million covenant-lite first-lien term loan due 2025 (L+375). The commitment deadline is noon ET Wednesday, March 20. Note that Newport Group announced on March 12 that it agreed to acquire PNC Bank’s Vested Interest unit, a defined contribution plan recordkeeping business. Terms of the transaction were not disclosed. The acquisition provides recordkeeping and administration services to plans with approximately $17 billion of assets under administration and will operate as part of Newport Group. Audax Credit BDC holds $2M of the existing 1L debt.

Investors received allocations of PetVet Care Centers’ $125 million add-on to its incremental term loan (L+325), which was issued at 96.5. Jefferies was left lead on the deal, which priced at the wide end of talk. Proceeds will be used to repay revolver borrowings and to place cash on the balance sheet to fund acquisitions under letter of intent and future acquisitions. The 50 bps of MFN protection lapsed on the loan in October per its six-month sunset. The operator of veterinary hospitals is controlled by KKR.