With the jumbo Power Solutions LBO financing out the door early last week after an over-the-weekend delay, the primary loan market assumed a more subdued tone as arrangers cobbled together a smattering of opportunistic business in the face of a dwindling pipeline. Arrangers continue to flock to the high-yield market for attractive rates—a trend that is likely to continue with the Fed’s dovish stance last week—with Allison Transmission the latest issuer to step forward with a bond-for-loan takeout exercise.

Activity for the Panther/Power buyout bonds dominated both new issuance and trading for bonds, but there was plenty of other activity elsewhere for both on- and off-the-run high-yield credits.

The uptick in opportunistic loan business is hardly a groundswell, particularly when put in the context of the long-running wave of repricing activity that came to a halt late last year. Of the $8.4 billion of gross loan volume launched last week by 16 issuers, $6 billion from nine issuers can be counted as opportunistic. Although there have been rumblings of recap activity, only two such transactions emerged last week. 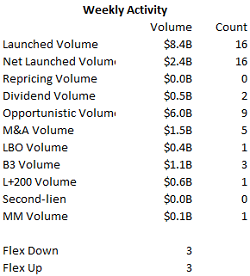 Accounts received allocations of Calpine Corp.’s $950 million TLB-9 (L+275), which broke to a 99.125–99.625 market, from issuance at 99. Morgan Stanley was left lead on the deal, which priced at the wide end of talk. Proceeds will be used to refinance the issuer’s TLB-8 due 2019 (L+175) and its TLB-6 due 2023 (L+250). The independent power producer is controlled by Energy Capital Partners. Barings BDC holds a combined $4.6M in principal amount of TL debt (L+250) across two tranches that are unaffected by this refinancing.

UBS, Bank of America Merrill Lynch and Antares Capital are circulating price talk of L+550-600, with a 98.5 OID, on the $595 million covenant-lite term loan for Clover Technologies. The 3.5-year term loan would carry 102, 101 soft call premiums in years one and two, respectively. Commitments are due Tuesday, April 2. Proceeds will be used to refinance the issuer’s existing term loan (L+450) ahead of its May 2020 maturity. Business Development Corp. of America holds $13.2M of the existing 1L debt.

Investors received allocations of the $50 million add-on term loan for ECi Software (L+425), which quoted at 99-100 post allocation, versus issuance at 99. Bank of America Merrill Lynch was left lead on the deal, which priced in line with talk. Proceeds will be used to repay revolver outstandings and for general corporate purposes. Apax Partners-controlled ECi Software is a provider of ERP solutions for small- and medium-size businesses in the office products and furniture, construction, supplies, hardware, sanitation, manufacturing and distribution industries. Audax Credit BDC holds $1.5M of existing 1L debt (L+425, 1% floor) due September 2024, while Oxford Square Capital Corp. holds $5M of the 1L debt and $15M of 2L debt (L+800, 1% floor) due September 2025.

Arrangers RBC Capital Markets, SunTrust Robinson Humphrey, BMO Capital Markets and KKR Capital Markets set talk of L+325 and a 98.75 offer price on the $175.4 million fungible first-lien add-on term loan for Legalshield. The $30 million add-on to the issuer’s second-lien term loan has been placed with a single account, and no OID has been disclosed. Proceeds fund a dividend, releveraging the issuer back to 6.1x, sources added. Commitments are due at noon ET Wednesday, March 27. The existing $505 million first-lien term loan due April 2025 initially priced at L+325 and exercised a 25 bps leverage-based step-down when net first-lien leverage was less than 4.3x. The issuer will reset the loan’s 101 soft call protection for six months. The existing $150 million second-lien term loan due April 2026 is priced at L+750. Audax Credit BDC holds $500,000 of the existing 1L debt, and Crescent Capital BDC holds an equity stake valued at $702,000.

Jefferies accelerated timing on the $50 million add-on to Mister Car Wash’s first-lien term loan, setting a new deadline at 5 p.m. ET today. The prior deadline was March 27. Proceeds repay revolver borrowings and fund cash to the balance sheet, sources said. The fungible add-on term loan is offered at 99.52, sources added. The add-on will be fungible with the covenant-lite first-lien term loan due August 2021 (L+325, 1% floor). The issuer last tapped the market in December via Golub Capital for a $125 million add-on term loan that funded an acquisition and repaid a portion of its revolver draw. At that time, the 101 soft call protection was extended for six months as the loan was increased to $611 million. Jefferies is administrative agent. Audax Credit BDC holds $995,000 of the existing 1L debt.

Morgan Stanley and Goldman Sachs this afternoon set price talk of L+425-450, with a 0% floor and a 99 OID, on the $465 million incremental term loan for Qlik Technologies. Lenders are offered six months of 101 soft call protection. Commitments are due by noon ET Friday, March 29. Proceeds, along with cash and revolver borrowings, back the company’s planned $560 million purchase of Nasdaq-listed Attunity. The incremental debt will be coterminous, but not fungible, with the borrower’s existing covenant-lite first-lien term loan due April 2024 (L+350). Note the 50 bps of MFN protection has lapsed on the 2017-vintage existing loan per its 18-month sunset provision. The loan has recently been quoted at 97.25–98.25. Ares Capital holds equity stakes valued at a combined $9.7M; Golub Capital holds equity valued at a combined $595,000; Golub Capital Investment Corp. holds equity valued at a combined $570,000; Barings BDC $7.4M in principal amount of the existing 1L debt; and Bain Capital Specialty Finance holds $22.7M of the 1L debt.

RBC Capital Markets today set price talk of L+400, with a 1% floor and a 99 OID, on the $75 million add-on first-lien term loan for Lyons Magnus. Proceeds back an acquisition. It will be fungible with Lyons Magnus’s existing $210 million covenant-lite first-lien term loan due 2024, which is being repriced upward from L+350 to match the spread on the incremental debt. Commitments are due by noon ET Tuesday, April 2. The company was last to market in June when it repriced its first-lien loan from L+425 and layered in an additional $15 million to refinance a portion of the issuer’s $60 million second-lien term loan. As part of the refinancing, the 25 bps step-down remained in place if the issuer is rated B2/B or better or net leverage is reduced to 3.35x. KCAP Financial holds $3M of the existing 1L debt.