Launched activity in loans remained active, though less robust than in recent weeks, as attention turned to clearing the decks of high-profile M&A transactions as well as deals coordinated across both the loan and high-yield markets; those coordinated deals pushed high-yield to nearly $8 billion of pro forma issuance, busier than those weeks bracketing the holiday but still trailing average weekly issuance. 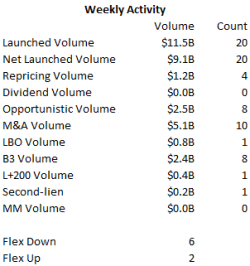 RBC Capital Markets outlined an OID of 99 on the $210 million add-on term loan strip for Allen Media. The loan would be fungible with the existing covenant-lite term loan due 2027 (L+550, 0% floor). The add-on loan includes a $100 million delayed-draw component. Commitments are due at noon ET Monday, July 26. Allen Media is acquiring seven television stations from Gray Television in connection with its acquisition of Quincy Media. Allen also is negotiating the purchase of three additional stations from other parties. Financing is also expected to include a $340 million add-on to the issuer’s $300 million of senior notes due 2028, according to Moody’s, which added that existing loans and bonds would need to be amended. Holders of the existing term debt include CION Investment Corp. with $9.8M in principal amount and OFS Capital with $2.9M.

Barclays set price talk of L+350-375 with a 0.75% floor and a 99-99.5 OID on the $310 million incremental term loan for Curia Global. The loan would mature in August 2026 and carry six months of 101 soft call protection. Commitments are due by 5 p.m. ET Thursday, July 22. Proceeds would finance the acquisitions of Integrity Bio and LakePharma. The issuer’s existing first-lien term debt matures in August 2024 and is priced at L+325 with a 1% floor; the originally $655 million tranche was put in place in 2017 to back the buyout of the company by Carlyle Group and GTCR though the issuer last October placed a $210 million add-on to the tranche to refinance its second-lien term loan. Holders of the existing 1L debt include Palmer Square Capital BDC with $4.9M in principal amount and Blackstone Private Credit Fund with $7M.

J.P. Morgan launched a $110 million add-on term loan for Excelitas Technologies, proceeds of which would be used to fund the $85 million purchase of PCO-Tech and for general corporate purposes. The arranger is circulating price talk of 99.5-99.75. The incremental debt would be fungible with the borrower’s existing $586 million first-lien term loan due December 2024 (L+350, 1% floor). The issuer last tapped the market for an $80 million nonfungible incremental loan (L+350, 1% floor), which priced at 95.5. Proceeds backed the acquisition of Axsun Technologies. AEA Investors acquired the company in late 2017. The financing for the buyout included a first-lien term loan split between $505 million and €250 million tranches as well as a $260 million second-lien tern loan (L+750, 1% floor). The issuer in 2018 completed a $100 million fungible add-on to the first-lien term loan to fund the purchase of Research Electro-Optics. Holders of the existing 1L debt include Audax Credit BDC with $487K in principal amount and Blackstone Private Credit Fund with $13M. Holders of the 2L debt include Audax Credit BDC with $1.5M and FS KKR Capital Corp. II with $6.6M.

UBS and KKR Capital Markets are launching a $390 million first-lien term loan for Hyperion Materials &Technologies. Proceeds back a refinancing. The deal will also include a $75 million revolving credit. The issuer was last in market in 2019 with a $340 million covenant-lite first- and second-lien deal to refinance debt; the transaction included a $240 million first-lien term loan due 2026 (L+550, 0% floor) with UBS as left lead, and a $100 million second-lien term loan due 2027 (L+900, 0% floor) with KKR as left lead. Note that the second-lien’s 101 hard call protection lapses next month. Holders of the existing 1L debt include Barings BDC with $13.8M in principal amount, Investcorp Credit Management BDC with $5M, CION Investment Corp. with $9.9M, MSC Income Fund with $7.4M and Main Street Capital Corp. with $22.2M.

J.P. Morgan launched $300 million fungible add-on to Jane Street Group’s first-lien term loan due 2028 (L+275, 0% floor). The new money is offered at 99. Pro forma for the increase, the loan would total $2.439 billion. Commitments are due at 5 p.m. ET Tuesday, July 20. Morgan Stanley remains administrative agent. The issuer in January repriced the term loan in January while adding $500 million for GCP. Holders of the existing 1L debt include Steele Creek Capital Corp. with $997K in principal amount and Palmer Square Capital BDC with $1.5M.

BofA Securities set talk of L+425-450 with a 0.5% floor and a 99-99.5 offer price on the $1.15 billion seven-year term loan B backing Platinum Equity’s roughly $4.5 billion acquisition of McGraw Hill from funds managed by affiliates of Apollo Global Management. The issuer also plans other secured and unsecured debt to fund the transaction. The seven-year term loan B will include six months of 101 soft call protection. The arranger group includes BofA, BMO Capital Markets, Macquarie, BNP Paribas, Deutsche Bank, PNC and UBS. Commitments are due at noon ET Tuesday, July 20. McGraw Hill in January completed an amend-to-extend transaction, pushing the maturity on its $1.37 billion term loan (L+475, 1% floor) to November 2024 and increasing the margin from L+400. An uptier bond exchange was completed as part of the deal, creating a new issue of 8% 1.5-lien secured notes due November 2024. Guggenheim Credit Income Fund holds $1.6M in principal amount of the 1L debt and $1.3M of the secured notes.

RBC Capital Markets, Barclays and BMO Capital Markets set a 99.5 offer price on the $275 million add-on first-lien term loan for Resolute Investment Managers that will fund a dividend to shareholders. The loan will be fungible with the existing $378 million term loan B due April 2024. As part of the transaction, pricing will increase to L+425 from the current L+375 with no change to the 1% floor. Pro forma term loan size will be $653 million. Commitments will be due at noon ET Thursday, July 22. Consenting second-lien lenders would earn a 12.5 bps amendment fee to allow for the one-time restricted payment. Sierra Income Corp. holds $6M in principal amount of the company’s 2L debt due April 2025 (L+800, 1% floor).

Barclays, Deutsche Bank, and Goldman Sachs set price talk of L+475, with a 0.75% floor on the $415 million first-lien term loan for RxBenefits. Proceeds from the term loan, along with a $45 million privately placed second-lien add-on and rollover equity, would fund an acquisition and reprice its existing $300 million term loan due December 2027 (L+525, 0.75% floor). The repricing is offered at par and the $115 million of new money at 99.5. The issuer is offering six months of 101 soft call protection on the loan, which would mature Dec. 18, 2027, consistent with the existing term loan. Commitments are due at noon ET Thursday, July 29. NextPoint Capital holds $4M in principal amount of the existing 1L debt.

Credit Suisse set price talk of 99.5 on the $310 million add-on first-lien term loan for Upstream Rehabilitation. The incremental debt would be fungible with the borrower’s first-lien term loan due November 2026, which is priced at L+450, with a 0% floor, and includes a 25 bps step-down at 5.65x total net leverage. Proceeds will fund the acquisition of Results Physiotherapy. The issuer is offering to reset the 101 soft call protection for six months. Pro forma for the transaction, the first-lien term loan would grow to $883 million. Commitments are due by 5 p.m. ET Wednesday, July 21. Audax Credit BDC holds $1.5M in principal amount of the existing 1L debt.

Investors received allocations of Zoominfo’s $200 million add-on term loan (L+300, 0% floor), which was issued at 99.5. Morgan Stanley was left lead on the deal, which priced at the tight end of guidance. Proceeds along with a $300 million add-on to its 3.875% notes due 2029 will be used to repay revolver borrowings that were incurred to fund the acquisition of Chorus, pay fees and expenses related to the transaction, as well as pay a tax gross up and for general corporate purposes. Nasdaq-listed ZoomInfo is a subscription-based B2B information services company provides proprietary data and integrated insights to B2B sales and marketing organizations. Blackstone Private Credit Fund holds $2M in principal amount of the existing 1L debt. – Thomas Dunford