Loan investors appear to be absorbing the huge calendar of new issues in stride, prompting an increasing number of accelerations and first reverse flexes among post Labor Day transactions. High-yield was back to business with a big pipeline, oversubscribed deals and plenty of M&A transactions, but Coinbase Global debt slipped underwater after aggressive pricing.

Thus far, activity has lived up to expectations that underwriters would quickly move to derisk M&A underwritings, underscored by the retail launch last week of Medline Industries’ long-awaited jumbo cross-border LBO loan by a BofA Securities-led underwriter group. At $6 billion, the U.S. dollar loan is the largest new-money institutional loan to hit the market since Refinitiv’s $6.5 billion loan about three years ago, although ahead of the lender call, sources indicated that preliminary interest already exceeds the deal size following an early-look round.

Price talk has yet to emerge. Accounts are being told to expect B2/B+/B+ corporate and B1/B+/BB- facility ratings. In addition to the TLB (which also includes a $1 billion equivalent euro-denominated tranche), debt financing for the buyout will include $3.77 billion of other secured debt, $2.23 billion of other secured mortgage debt and $4 billion of other unsecured debt, sources added. Earlier marketing materials shown to investors outlined pro forma leverage of 4.6x/6.3x off of marketed adjusted EBITDA of $2.368 billion, with an equity check of approximately $16.69 billion, according to sources.

Even if the transaction moves swiftly through the market as expected, it won’t dent active deal flow, with $34.7 billion currently in market via 41 issuers. The furious pace of the previous week’s launches abated somewhat last week. Gross and net volume were $18.1 billion and $11.4 billion, respectively, but stripping out Medline volume would be far more modest at $12.1 billon/$5.4 billion. Obviously, Medline weighs heavily on the $11.3 billion of launched M&A and opportunistic activity continued to keep pace, at $6.6 billion last week, with more deals said to be in the works. 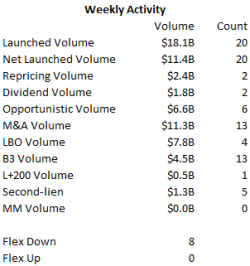 Investors received allocations of Caesar Resort Collection’s repriced $1.787 billion first-lien term loan (L+350, 0% floor), which broke to a 100.125-100.5 market from issuance at par. The transaction reduces pricing from L+450 with a 0% floor. Credit Suisse was left lead on the financing, which priced tight to talk. Caesars Resort Collection, a subsidiary of casino-entertainment company Caesars Entertainment, was formed in 2017. Palmer Square Capital BDC holds $3M in principal amount of the existing 1L debt.

A Goldman Sachs-led arranger group set price talk of L+375-400, with a 0.50% floor and a 99 OID on CHG Healthcare’s $1.58 billion first-lien term loan. Commitments are due at 10 a.m. ET Thursday, Sept. 23. The first-lien term loan would include a 25 bps step-down set at a half-turn inside of closing net first-lien leverage. The issuer is seeking a $1.58 billion first-lien term loan and a $430 million second-lien term loan, which has been placed privately. Proceeds, along with around $300 of cash on hand, will be used to refinance its roughly $1.71 billion of existing debt and pay a $560 million dividend to shareholders, according to a Moody’s report. Holders of the company’s 1L debt due July 2023 (L+300, 1% floor) include Blackstone Private Credit Fund with $23.5M in principal amount and Palmer Square Capital BDC with $484K.

Macquarie Capital launched a $200 million incremental term loan for NorthStar Group Services, setting a lender call for 10 a.m. ET Tuesday, Sept. 21. The incremental term loan will support a recapitalization of the company that includes equity contributions from new third-party investors. Price talk is not yet available, but the incremental debt would be fungible with the borrower’s approximately $420 million term loan due November 2026 (L+550, 1% floor). The loan is governed by a maintenance covenant and has annual amortization of 2.5% until year four, at which point it steps up to 5%, and again to 7.5% in years five and six. Holders of the existing 1L debt include Palmer Square Capital BDC with $3M in principal amount and Sierra Senior Loan Strategy JV I with $4.9M. PhenixFIN Corp. holds an equity stake valued at $33.4M.

Jefferies outlined a 99.5-99.75 offer price for the $150 million add-on term loan for Southern Veterinary Partners. Proceeds fund the company’s acquisition pipeline. The incremental loan will be fungible with the borrower’s existing first-lien term loan due October 2027, which is priced at L+400, with a 1% floor, and is covered by 101 soft call protection through Oct. 5. Pro forma for the add-on, the first-lien would grow to about $583 million. The issuer is concurrently placing privately a $100 million delayed-draw first-lien term loan. Commitments are due by noon ET Wednesday, Sept. 22. Prospect Capital holds $8M in principal amount of the company’s 2L debt due October 2028 (L+775, 1% floor). Golub Capital BDC holds equity stakes valued at a combined $5.9M.

A Jefferies-led arranger group set an offer price in the 99.5 area on the $350 million funded add-on first-lien term loan for Therma Holdings. The proposed $67.8 million add-on to the delayed-draw loan is offered at 99 in order to be fungible with the borrower’s existing unfunded delayed-draw term loan, which priced at 99 in December. The funded add-on term loan add-on would be fungible with the existing first-lien loan due December 2027 (L+400, 0.75% floor), increasing the tranche size to about $738.1 million. The delayed-draw add-on would be tacked on to the existing $75 million delayed-draw tranche that trades as a strip with the term loan, increasing the DDTL to $142.8 million. The ticking fee would be 100% of the spread at closing, consistent with the existing debt. Proceeds would support acquisitions. Audax Credit BDC holds $417K in principal amount of the existing 1L debt.

A BofA Securities-led arranger group set price talk of L+375 with a 0.50-0.75% floor at par on the repricing of Virtusa’s $599 million term loan B due February 2028. Commitments are due at noon ET Wednesday, Sept. 22. The existing loan, which was syndicated in December but closed in February, cleared at L+425 with a 0.75% floor and a 25 bps step-down at 3x gross first-lien leverage, versus 3.8x at closing. The 101 soft call protection rolled off last month. Barclays, Deutsche Bank, Goldman Sachs, HSBC and Nomura are joining BofA as co-arrangers on the loan. Blackstone Private Credit Fund holds $17.5M in principal amount of the existing 1L debt. – Thomas Dunford