Where shall we begin?

Obviously, the week ended February 28, 2020 was like no other in recent memory.

Even if you’d been marooned on a desert island you’d have known something was going wrong from the collective groans emanating from investors worldwide.

That’s far and away the biggest weekly drop since we began to keep a weekly spreadsheet to support our Market Recaps back in 2018.

On a personal note, we’ve been closely following the BDC market for nearly 15 years and the last time we remember such huge moves in a week was during the 2011 Euro-crisis.

From high to low during the multi-month crisis, BDCS – which had just been launched by UBS as an Exchange Traded Note – dropped (28%) in all, with a few double-digit weeks along the way.

Not one BDC moved up in price on the week.

(The only BDC which dropped minimally was – for reasons unknown – Oaktree Strategic Income (OCSI), down just -2.4%).

No less than 29 BDCs dropped (10%) or more in the week, essentially wiping out a year or two or three of dividend earnings in the space of a few days.

Where before there had been 17 BDCs trading within 5% of their 52 week high and only a handful close to their 52-week lows, there are now none of the former and 34 of the latter.

So many BDCs reached new 52 week or all-time lows that we lost track.

Where there were a recent record 20 BDCs trading at or above book, there are now just 9.

BDCS has lost in price all its gains made since late December 2018 when the BDC sector – and the markets generally – were beginning a rally that would last till February 2019.

From mid-December 2019 – when the BDC sector was at a recent high- the price has dropped (12.9%) – obviously mostly in the last few days.

We could go on and on, but the picture is clear: this was a broad and sustained drop for the sector.

As this chart shows – and our readers must surely know – the BDC sector was not alone.

All the major stock market indices slipped down in unison: 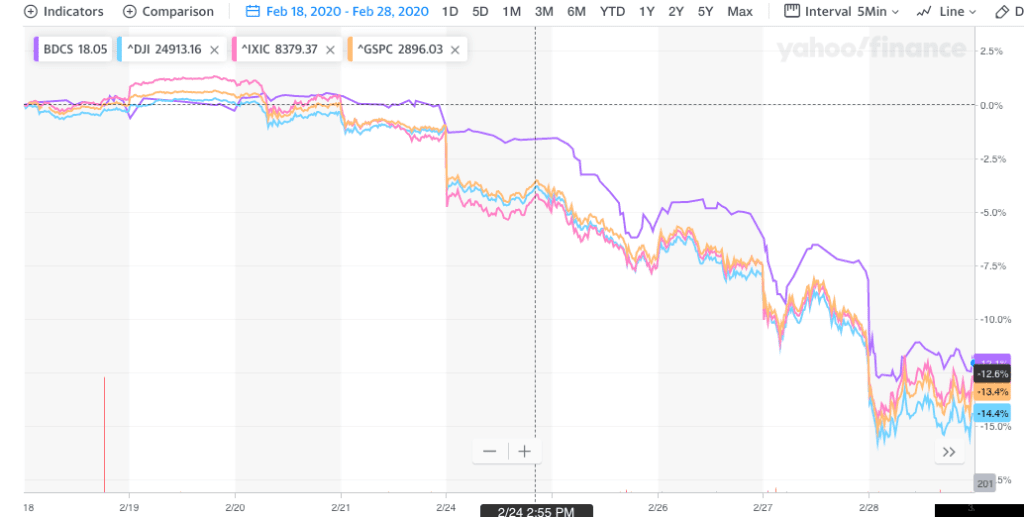 Completely lost in the maelstrom was a busy week for BDC earnings results.

We counted 10 reporting players, almost one quarter of the public BDC universe.

As has been the case through BDC earnings season so far, individual results were somewhat better than we’d anticipated.

There were 5 BDCs we marked as generating GOOD results, after reviewing earnings, book value changes, credit performance and a host of other variables.

Another 4 had MIXED results, and 1 was rated POOR (Oxford Square Capital or OXSQ).

However, if results were good, bad or indifferent investors did not care and just hit the sell button repeatedly.

The actual two worst performers were BDCs that have not even reported yet: Great Elm (GECC) and Stellus Capital (SCM).

In any case we wouldn’t draw too many conclusions from who was down a lot and who a lot more.

This could change from day to day and week to week.

There might be some method to the market’s madness but mostly investors wanted to get out regardless of fundamentals.

That same manic level of trading was repeated across the entire sector.

In this heated atmosphere the BDC Reporter continued to review and de-construct the earnings releases, filings and conference call transcripts of reporting BDCs.

Ironically, we have been increasing our output of analysis, seeking to summarize results and annotate the conference call transcripts of every public BDC in turn.

Later on, we’ll review credit profiles and see who has been added and who deleted from the ranks of BDC portfolio companies.

For a complete list of whatever work we’ve done – and not all has yet been published on the pages of the BDC Reporter – go to the BDC: Results Summary Table, which contains a complete – albeit constantly updated – list.

Unfortunately, in the short term, much of this analysis seems moot.

Investors are looking beyond the BDCs themselves as the growing Covid-19 pandemic, and their own individual portfolio positioning in this time of crisis.

Which is not unreasonable given that everything we think we know about the prospects of the 45 BDCs we track is up in the air.

It’s not just the uncertainty about how the pandemic will play out in terms of the impact on the economy and on the myriad companies BDCs finance.

Also undergoing massive change is the cost of capital, both for BDCs as lenders and as borrowers.

Now the Fed is talking about 3 or 4 rate cuts that could push 1 month LIBOR down below 1.0%

This is already impacting BDC investment income and secured borrowing expenses and will get worse.

Then there’s the ever-changing yield on medium and long term fixed income debt.

The risk-free rate is ever lower, which will impact BDC borrowing costs for years to come, both from unsecured private debt offerings and the pricing on new SBIC debentures.

Also changing – essentially overnight – is the volume of new leveraged debt deals being arranged in this caustic environment.

As Bain Capital Specialty Finance’s (BCSF) CEO was warning this week on a conference call: investment activity is slowing down very quickly.

All these changes – none of which are close to being at an end and for which there are multiple potential scenarios – make all prior assessments of BDC earnings, leverage, dividend levels and credit losses almost immaterial.

Analysts and investors will be going back to the drawing board in the weeks ahead, maybe multiple times.

We don’t know if the markets will open up or down next week.

We’re writing this on Saturday night but even the pre-markets just before the open cannot be relied upon as any kind of useful indicator.

However, as an old BDC hand – with the emphasis on old – we worry that there’s plenty of room yet for BDC values to drop.

We’ve seen on several prior occasions that when BDC investors face uncertainty about the macro environment their most immediate reaction is to shoot/sell first and ask questions later.

Given that nobody expects the extent of the ravages of Covid-19 on the global economy to be known for some time, chances are many investors will rather be out than in.

We’ve not even hit the all-time low for BDCS, which came to market in 2011.

BDCS needs to drop another (5%) before we reach that lowest level of December 2018.

More worrying is that BDC investors may act like they did in 2008-2009, when many worried about the very survival of the world’s financial system.

At that time Ares Capital (ARCC) – then and now one of the biggest BDC players – dropped (85%) in price.

Not helping is that the implementation of the Small Business Credit Availability Act (SBCAA) has left ARCC – and many of its peers – much more leveraged than ever before.

Just since the SBCAA was enacted total investment assets of 44 of the BDCs we track (we’re leaving off Alcentra-Crescent Capital till we get the first results) has grown by 34%.

(The actual number is probably higher as we’re still inputting the numbers of those BDCs that have reported IVQ 2019 results and still are waiting on several new announcements).

BDC equity is essentially flat in the same period, which means that risk levels have increased substantially.

Nor can anyone argue that after several years of borrower friendly conditions and bare knuckled competition for loan assets that BDC portfolios are bulletproof from a credit standpoint.

Comparisons are invidious but, by and large,  it would be hard to argue the credit quality of BDC assets is better than those in place just before the Great Recession.

Given all the above, we wouldn’t be surprised if investors do what they’ve done before in these dark day situations: continue to sell off.

Much has changed in the world and in the financial markets in the past twelve years since the Great Recession but not human nature.

For our part, we’ll continue to analyze BDC fundamentals as before, even if for a period of time they will not seem to have any bearing on stock performance.

Sooner or later the long term outlook and earnings power of BDCs will matter again, so we’ll keep grinding away.

After all, that other lesson we’ve learned as an old BDC hand is that these periods of disruption – and we’ve been through five (not including this one) during our tenure – do not last.

We won’t add “for long” because some episodes have gone on for an extended period – over 18 months at worst.

There’s no handicapping this latest episode because each BDC drama has had different causes and its own timeline.

Neither the BDCs themselves, their shareholders, analysts, investment bankers and the BDC Reporter have ever had to contend with a global pandemic on this scale before.

Anything could happen, for good or ill.