As the coronavirus news coming out of Hunan and from hospitals – and cruise ships –  around the world worsened, stock market investors counter-intuitively hit the “Buy” button.

Necessarily, the BDC sector followed suit, moving up by 1.70% (using BDCS as our measuring stick) with 38 of 45 individual stocks in the black.

That’s the highest that particular metric has been since the week ended November 29, 2019.

Up And Down. And Up.

Top of the heap was Newtek Business Services (NEWT), whose only news in recent days was re-affirming its 2020 dividend projection.

As we’ve noted before, NEWT is the most volatile of stocks, often grabbed onto by momentum investors and just as often discarded by the same.

See the 6 month chart for the BDC below for an illustration of the ups and downs NEWT shareholders have to endure. 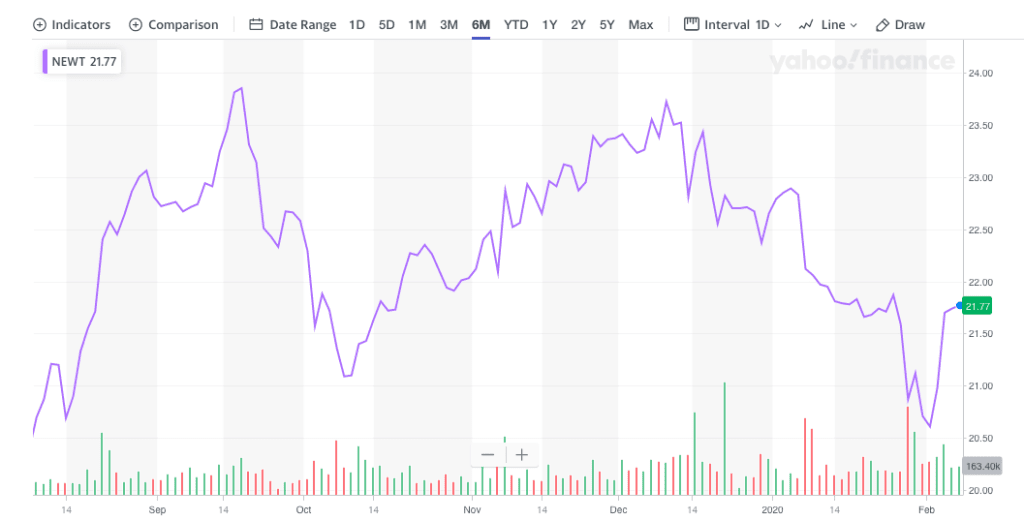 Depends On What You Measure

That’s the seventh biggest increase in the last 12 months among public BDCs.

Amongst the rest of the Big Movers, only one BDC amongst the eight who reported results as part of earnings season was represented.

That was Gladstone Investment (GAIN), which moved up 3.7%.

The other seven did not fare so well.

Least favored was Oaktree Specialty Lending (OCSL), which reported Net Investment Income Per Share only half as good as the quarter before.

Apparently some investors were surprised by the long scheduled end of the waiver period for some of the fees Oaktree has chosen to charge OCSL since taking over from Fifth Street.

When the asset management giant took over from the much unloved Fifth Street organization, the new manager used the opportunity to charge higher compensation.

Under BDC rules, there’s a stated lag time before those higher fees can kick in, but the time is up.

That may have contributed to a (2.6%) lower stock price on the week.

From its highest point OCSL is down (4.1%) in the last few days.

Still OCSL is far from “cheap” from a valuation standpoint even after the pullback, still trading at 11.6x the FY 2020 earnings projection, and 14.3x the regular dividend level.

The Biggest Loser on the week was the BDC about which there is the least new information about and which certainly did not report results: Medley Capital (MCC).

As we were taught: if you have nothing new to say, don’t say anything at all, so we’ll leave the MCC update at that.

In any case, the BDC sector- buoyed by the general bullishness – closed in on a new milestone with the Wells Fargo BDC Index close to a 2020 YTD high.

That also serves as the All Time High level for the BDC index, which was reached on January 23 of this year.

Since the end of 2018, the BDC sector – on a “Total Return” basis  – is up more than a third when price change and distributions received are concerned.

Not quite as good as S&P 500 investors can boast of over that period, but still impressive.

From a news standpoint, this was also a busy week thanks to the launch of the “real” BDC earnings season.

(As our readers know Saratoga Investment (SAR) and MVC Capital (MVC) have already clocked in thanks to earlier closing months in the quarter.

We’ve reviewed all the earnings releases, 10-Q filings and conference call transcripts involved and glanced at the attendant investor presentations for all eight reporting BDCs.

Frankly, none of the published results knocked our socks off in the way that SAR out-performed in its last quarter.

On the other hand, there were no disaster stories to report either.

As we’ve been doing for several quarters now, we rated each BDC’s results for the quarter as GOOD, MIXED (previously FAIR) or POOR.

The scorecard for this week was 3 GOOD and 5 MIXED, with no results rated POOR as yet.

The three rated GOOD were (by ticker): GAIN, OCSI and PFLT.

From a book value per share standpoint, 4 were up and 4 were down.

That’s hardly great but modestly better than we’d been expecting, but it’s early days yet with four-fifths of BDCs still to report.

No BDC cut its regular distribution in the period and two of eight raised their pay-outs.

The latter consisted of Gladstone Investment (GAIN) – buoyed by a series of equity investment gains – and Capital Southwest (CSWC), which bagged one huge win.

We’ll get a better picture in the weeks ahead as many more BDCs report results.

Earnings season extends through all of February.

With now almost half the BDC universe trading above book value, some BDCs are ramping up At The Market (“ATM”) equity raising programs.

Capital Southwest (CSWC) – coming off a quarter with a major Realized Gain and an increase in its dividend – boosted the size of its ATM from $50mn to $100mn.

Likewise, Gladstone Investment (GAIN) announced that from January 2020  over $3mn of new equity capital had been arranged in a similar manner.

This resulted in an interesting back and forth between analyst and BDC that gives some insight into how the latter think about tapping the equity markets:

I just have one question today about capital allocation. And Dave, I do appreciate that you noted that the pipeline looks healthy, and I obviously realize that issuing equity at the current stock price is nicely accretive to NAV. But why not use your available debt capital instead since it’s meaningfully cheaper than common equity and your leverage is still quite low?

So Mickey, again, I think as we’ve talked many times, I think about capital and availability sort of being somewhat fungible. The decision around raising some equity through the ATM frankly was less driven by our immediate capital needs as much as really taking a longer view and thought of who knows what the world is going to look like in the next 9 to 12 months. We’re in a wonderful position to be able to shore up our capital base and especially our common equity base without diluting shareholders and as you point out actually being somewhat accretive.

The objective is not to go and raise a slew of equity at this point because we need to put it to work. We thought it was a relatively effective way to do it. The cost of that equity if you look at the relative yield based on the dividend that we’re paying out and will continue to pay out on the common stock price at the current levels of course, if they start to decline for whatever reasons, we’ll be, as I mentioned, very careful in how we do that.

So again, somewhat opportunistic in terms of a good way of thinking about the corporate finance of this company and the relative ability to lay in, if you will, some fairly low-cost equity. So that’s sort of a long answer, Mickey, but it’s really more about that”.

The key word there is “opportunistic”.

Investor enthusiasm for the BDC sector waxes and wanes.

We are currently in a waxing phase.

We expect several other BDCs are doing the same kind of quiet capital raising, given that investors are in a tractable frame of mind.

With the benefit of hindsight, we can see this latest BDC rally began in mid-October 2019.

The rally has been on pause since the week before Christmas, but is on the move again.

FYI: that’s just 1.4% higher than the BDCS price on Friday.