Price-wise, the BDC sector – as measured by both the UBS Exchange Traded Note which contains most of the stocks involved – with the ticker BDCS – and the Wells Fargo BDC Index – was up.

However, the major indices have moved much more strongly of late, and the BDC sector – while trending upward – is quite far behind.

Every week the percentage increase in BDCS was lower than the S&P 500.

Four weeks ago BDCS was down when S&P was up.

In the three subsequent weeks, S&P has outstripped BDCS every time and by a factor of two overall.

To the BDC Reporter this suggests a BDC sector which has some self-doubt, even while being caught in the orbit of the major indices, which are in a period of euphoria.

Most individual price action was relatively mild in this first week of earnings season in which 8 BDCs reported results.

Two Up. Two Down.

The two at the top were Hercules Technology (HTGC) and Owl Rock Capital (ORCC).

Probably not coincidentally, both BDCs reported quarterly results this week, and both were trouble-free.

We’ve seen this pattern before: a mini price surge after earnings are reported as investors have a sense of relief that nothing went wrong.

Sentiment has been good for HTGC for some time and this week’s increase of 4.2% continued a multi-week upward trek.

Not bad for a BDC that lost its CEO to the college admissions scandal but does not seem to have missed a beat under new leadership.

That’s a compliment to both new CEO Scott Bluestein and former chief executive Manuel Henriquez, who built up the organization over many years.

HTGC’s principals remain ambitious and sketched out plans to take the portfolio from the $2.0bn level to the $3.0bn level. And beyond.

Here’s what Mr. Bluestein said on the most recent Conference Call:

We crossed the $2 billion portfolio mark in Q2 and that’s why on the call last quarter we talked about the fact that we were now going to start to sort of reinvest once again in our team, in our systems, in our platform, and the goal there is really to position us to get to the next portfolio mark that we believe is roughly $3 billion.

In Q2 we made several investments. We’ve continued to make some investments, again in both team and in the platform in Q3, and we have confidence that the investments that we’re making now and we’ll probably continue to make through the end of the year will position us to be able to support a debt investment portfolio of roughly $3 billion. Once we cross that threshold, which is probably somewhere between a year and two years away, we would again then look to make some additional investments in the platform at that time.

In fact, that’s a two and half year high point.

Stock price action has been choppier for ORCC since going public in July at $15.30.

That’s not unusual price action for large-cap BDCs after an IPO, especially with the volume of shares available to trade is limited.

However, there was some sort of profit-taking in September and the price dropped quickly down to $15.73.

Since then, ORCC”s stock price has moved jerkily up by a total of 8.9%.

The financial performance for the period was fine, but nothing spectacular.

Net Investment Income Per Share (NIIPS) met analyst expectations at $0.36, and NAV Per Share was down only slightly to $15.22 from $15.28 the quarter before.

The new regular dividend of $0.31 was unchanged from the prior quarter and is supplemented by a series of previously announced Special distributions that extend through 2020.

On the downside, the Biggest Loser was – far and away – Oxford Square (OXSQ).

After reporting much lower NAV and earnings for the quarter, investors punished the stock.

This cliff face chart tells the story better than we ever could:

Apparently investors had under-estimated how impacted the BDC was going to be by a weaker CLO market.

For better or worse, OXSQ has made a big bet on owning the equity tranches of CLOs, and paid the price this quarter.

Over-reaction? Possibly, if we compare the YTD price chart of the BDC against two other public companies who invest exclusively in CLO equity.

Again, the chart tells the story:

Will we be hearing some new development shortly – such as a merger with OXLC?

Or is this just a case of the chips falling where they may?

We don’t know and analysts and investors don’t seem to care as there were no questions asked or taken on the quarter’s Conference Call….

This tiny BDC has been on a downward path all year, where its stock is concerned, but had stabilized of late.

This week the stock price headed sharply southward and the volume of shares traded has increased.

So Far So Good

Excepting OXSQ, market reaction to the BDC’s reporting results in the week as – we’ve seen for HTGC and ORCC – has been pretty favorable.

We maintain a list of all the BDCs that have reported and compare their closing price just before earnings are revealed with the current level.

In this case, the Friday November 1 close.

The gainers are led by HTGC and then by Horizon Technology Finance (HRZN).

However, on average the percentage increase is only 1.2%, suggesting that the market was more reassured than surprised to the upside.

The best performer in a way was a BDC that recorded some of the worst numbers in the quarter: BlackRock Capital (BKCC).

NIIPS of $0.14 only just covered the recently reduced distribution of the same amount, despite a  jump in investment assets and in debt to equity.

The credit-challenged BDC added a new material non-accruing loan in the period as well, which will impact investment income for an indefinite period.

We discussed the new troubled credit in a post on the BDC Credit Reporter, the biggest one we’ve identified so far amidst the 8 reporting BDCs.

Yet, BKCC increased slightly in price since reporting.

We’re guessing investors might be buying in to management’s contention that the worst of its troubles are in the rear view mirror.

This seems to signal – in the minds of some – that some turning point has been reached and we’ll see better results ahead.

The BDC Reporter has not yet drilled into the credit portfolio, so does not have a view.

Word To The Wise

We do note, though, that AGY Holding – whose second lien debt went on non accrual this quarter as mentioned  – also has a first lien loan on BKCC’s books that is still accruing.

That’s nearly $25.00mn at a 12.00% PIK rate or $3.0mn of investment income that could yet go from performing to non-performing in a New York Minute.

That’s the equivalent of 8% of the BDC’s Net Investment Income and enough – by itself – to tip NIIPS below the $0.14 quarterly level.

There’s another impossibly busy couple of weeks ahead, with even more BDCs reporting third quarter results.

Glancing down the list of BDCs entering the batting box, we’ll be most interested in the following:

Capitala Finance (CPTA): We’ll be looking for an update on credit quality and problems – if any – with the SBA that might endanger the ability of the BDC to upstream income from its SBIC subsidiary to the parent.

The BDC is in a similar position to BKCC: promising that its multiple credit troubles are a thing of the past and that the future – and NAV + earnings – will be brighter.

The market seems to believe they know the answer as this 1 month upward chart suggests: 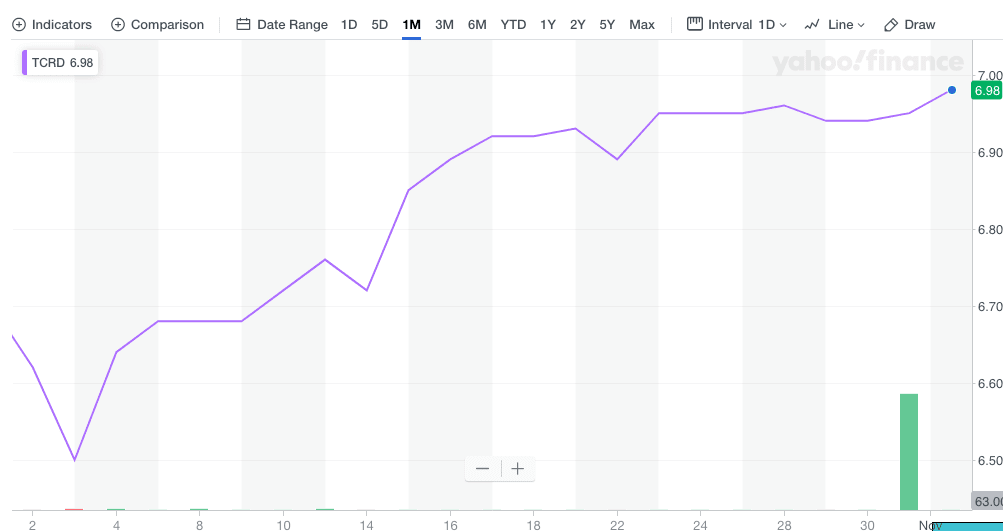 There’s more besides, but there’s only so much room on these pages.

We should have plenty to write about for weeks to come, both from expected and unexpected quarters.

Whether any trend of results, though, can break the BDC sector out of its narrow price range and back into rally mode is debatable.

We continue to believe that broad sentiment in the credit markets is too negative at this stage – and getting worse – and unlikely to lift all BDC boats.

The major indices have had a good run of late but can only go so far, which might rob the BDC sector of a positive factor aiding prices in recent weeks.

Nonetheless, the markets are there to surprise and confound us so we’ll limit ourselves to reporting what happens.